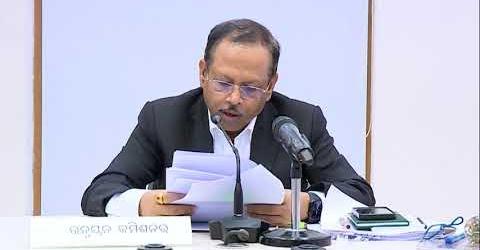 Bhubaneswar:21/1/23: The Odisha Cabinet Meeting held under the Chairmanship of Chief Minister Naveen Patnaik today took 12 major decisions including the hike of the grant-in-aid to eligible employees of aided non-government colleges including erstwhile junior colleges in the state.

Informing people about cabinet decisions, Development Commissioner P K Jena said that the hike in grant-in-aid will be effective retrospective from January 2022.

As per the decision, around 15,711 teachers and employees will benefit and the state government will incur an additional expenditure of Rs 290 crore annually.

Worth mentioning here that certain categories of employees were dissatisfied with such enhancement and after considering their concern the Government have been pleased to extend the Grant-in-Aid on the basis of ORSP Rules, 2017 (7th pay) with effect from 01.01.2022 and thereby actual enhanced financial benefit should be effective from 1st January, 2022.

“In order to implement various skill development programmes successfully, it is felt imperative to fill up the vacant posts of Employment officer in Employment exchanges of the state by way of amendment to Odisha Employment Service Group -B (Recruitment & Conditions of Service) Rules, 1990, “stated the office release.

The other decisions include:

2023-01-21
Editor in chief
Previous: Odisha CM has congratulated Aska Model PS being selected as number one police station in the country for the year 2022
Next: First Batch Of Timber For Chariot Construction Leave Dasapalla