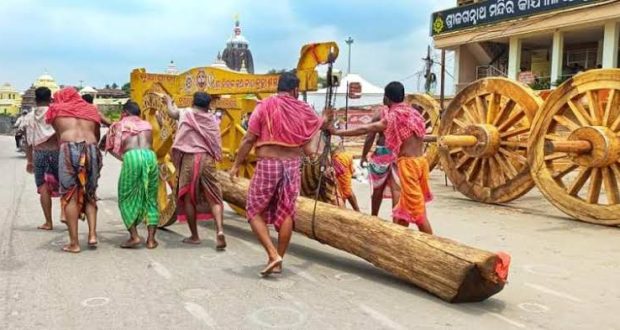 in District Diary, State News 17 days ago Comments Off on First Batch Of Timber For Chariot Construction Leave Dasapalla 54 Views

Puri:21/1/23: The first lot of wood for the construction of three chariots for Lord Jagannath’s annual Rath Yatra in Puri left Dasapalla in Nayagarh district.

According to sources, as many as 104 wooden log pieces were dispatched from Dasapalla after a special puja ritual at Mahaveer Temple.

Three trucks carrying the logs left for the ‘Ratha khala’ where the three giant chariots are to be constructed on the Grand Road in the seaside pilgrim town. The process for making the chariots for the Rath Yatra of sibling deities of the 12th-century shrine had begun last month when a team of servitors went to Nayagarh to identify the wood. The three-member team carrying ‘Mala’ garlands, ‘Patani’ and ‘Lagiluga’ (dresses), and prasad of Sarapuli, Biripitha, and Ladoo had gone to Badamula in Nayagarh. The team comprised the supervisor of chariot construction Sudarshan Mekap, head of Bhoi servitors Rabi Bhoi, and amin Laxman Mahapatra, the sources added.