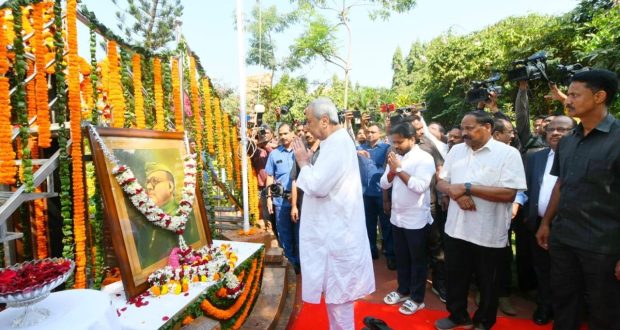 Cuttack:23/1/23: Odisha Chief Minister Naveen Patnaik paid tributes to Netaji Subash Chandra Bose on his 126th birth anniversary in Cuttack here today. Arriving at Netaji’s birthplace museum in Cuttack city, Naveen hoisted the flag amid slogans of “Amar Rahe Netaji Subash Bose”. He later took a tour of the museum after the event. Earlier, Khandapada MLA and founder-editor of Odia daily Sambad Soumya Ranjan Patnaik also paid his tributes to Netaji at the museum. He was joined by Ama Odisha secretary Swaraj Mishra and other members of Sambad’s Cuttack edition.

Governor Prof Ganeshi Lal also paid floral tributes to Netaji. “The Utkal Janani has given birth to many brave freedom fighters. Veer Surendra Sai was also one of them whose birthday is also celebrated today. But adequate respect is yet to be paid to Surendra Sai. I came to know from a newspaper that his birthplace is lying neglected. I will soon be writing to the chief minister to take care of his birthplace,” the Governor said.

An art exhibition on the life of Netaji was organised under the aegis of Culture department in association with Odisha Lalit Kala Academy and students of Ravenshaw Collegiate School. Different cultural programmes too were organised to mark Netaji’s birth anniversary. Many political leaders, bureaucrats, senior citizens, intellectuals, students and also the general public visited the museum.

2023-01-24
Editor in chief
Previous: 214th birth anniversary of great freedom fighter Veer Surendra Sai Jayanti was celebrated
Next: CRUT is all set to provide Mo Bus service from Baramunda Bus Stand in the capital city here to Tangi and Chandaka