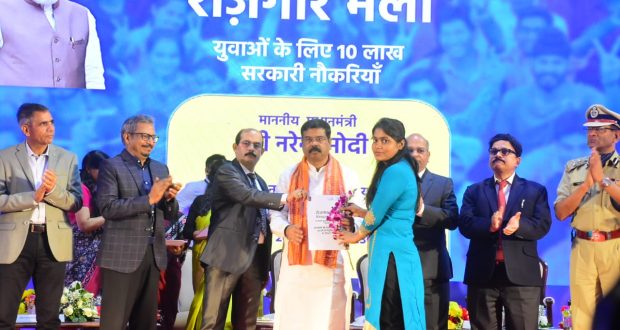 Bhubaneswar:20/1/23: Union Minister for Education and Skill Development & Entrepreneurship, Dharmendra Pradhan distributed as many as 128 appointment letters to newly inducted recruits as a part of Rozgar Mela here in Odisha on Friday.

“I am happy to distribute appointment letters to 128 newly appointed young men and women in various departments of the Government of India on the occasion of Rozgar Mela in Bhubaneswar,” Pradhan tweeted.

This is the third tranche of Rozgar Mela. Earlier, the Prime Minister had distributed as many as 71,000 letters to newly inducted government recruits in November and handed over 75,000 letters in October last year.

The Rozgar Mela is a step towards fulfillment of the commitment of PM Modi to give top priority to employment generation in the country.