Badamba-Gopinathpu:14/1/23Tragedy struck a Makar Sankranti Mela in Odisha on Saturday as at least two people died in a stampede on the Badamba-Gopinathpur T-bridge in Cuttack. The injured were rushed to the Community Health Centre (CHC) at Badamba. According to reports, more than two lakh people attended the mela. An elderly woman was one of the two killed in the stampede.

Athagarh Sub-collector Hemanta Kumar Swain said the incident took place due to a sudden increase in the number of devotees, including women and children, in the afternoon to visit a fair organised on the occasion and also to pay obeisance to Lord Singhanath. Badamba-Narsinghpur MLA and former minister Debi Prasad Mishra confirmed that one woman, identified as 55-year-old Anjana Swain, died in the incident, while four seriously injured people were admitted to SCB Medical College Hospital in Cuttack city.

The festival has been cancelled and the entry of devotees into the temple has been restricted by the Cuttack district administration. The district administration has also imposed section 144 of the CrPC for two days. Sub-Collector Athagard will probe the whole incident, ordered the Cuttack DM. Three platoons of force have been deployed to control the law and order situation. Makar Mela is organised every year on Mahanadi riverbed near the shrine. Hundreds of devotees coming from Cuttack, Khordha, Puri, Angul, Dhenkanal, Boudh and Nayagarh districts visit the shrine.

Chief Minister Naveen Patnaik has grieved the death of a woman in stampede at the Makar Mela in Badamba Nrusinghanath Peetha in Cuttack district.The Chief Minister announced an ex-gratia of Rs 5 lakh to the next kin of the deceased and expressed his deep sympathies to the bereaved family. The Chief Minister has ordered to provision proper treatment to the injured at free of cost. He also wished a speedy recovery to the injured. 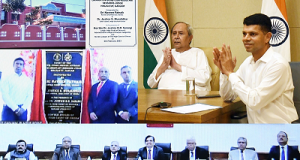