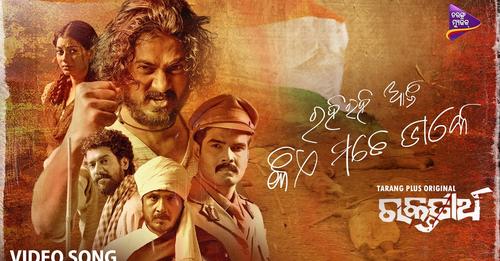 Tarang Plus is coming up with a new web series ‘Rakta Tirtha’on January 26, 2023

in Entertainment January 4, 2023 Comments Off on Tarang Plus is coming up with a new web series ‘Rakta Tirtha’on January 26, 2023 69 Views

Bhubaneswar:4/1/23: Popular OTT platform Tarang Plus is coming up with a new web series ‘Rakta Tirtha’, reminiscing the horrifying bloodbath during India’s freedom struggle movement that shook the entire nation.

Produced by Tarang Cine Productions, Rakta Tirtha is an attempt to bring back the chilling memories of Eram massacre which took place on September 28, 1942, at Eram in Odisha’s Bhadrak district.

The web series is all set for Republic Day release on Tarang Plus. The trailer of the much-anticipated Rakta Tirtha, which was released earlier, is a visual treat for cine lovers who love watching patriotic web series.

Ace director Sushant Mani seems to have left no stone unturned to make the web series at par with the international level.

It is no exaggeration to say that every visual and shot is a masterpiece; and, needless to say, the audience will have goosebumps while watching the revolutionaries’ struggle for freedom.

Eram, which is known as the Rakta Tirtha (a place of pilgrimage tinged with the blood of the martyrs) is a glorious chapter in the Indian freedom movement. The Imperial police had opened fire on a gathering of freedom fighters at this place on September 28, 1942, when they were protesting against the foreign rule peacefully. As many as 29 people fell to the police bullets while 56 more were wounded in one of the worst ever mayhems perpetrated by the Colonial occupations.

Actor Rishi said, “Acting and living a character are two different things. I lived the character of deputy superintendent of police Bikram Singh in the web series. It is a patriotic thriller that will really aware you about how much Odisha contributed to India’s freedom struggle.”

Sharing his experience of working in Rakta Tirtha, actress Cookies said, “Working in a period drama is completely a new experience for me and that to in Indian freedom struggle backdrop. I portray the character of a village girl who died during protest in 1942. We recreated the whole drama and it was an amazing experience.”

The picturesque locations, subtle cinematography and patriotic sequences are truly unmatchable. Everything about the web series –starting from the powerful dialogues to the stunning action scenes- appears to be right as rain.

The story is written by Ranjan Satpathy, creative head of OTV Network, while its music is composed by Gaurav Anand. Dialogues have been penned by Dilip Choudhary while Biplav Singh has taken care of its screenplay.Rakta Tirtha can be watched on Tarang Plus once it releases on January 26, 2023.