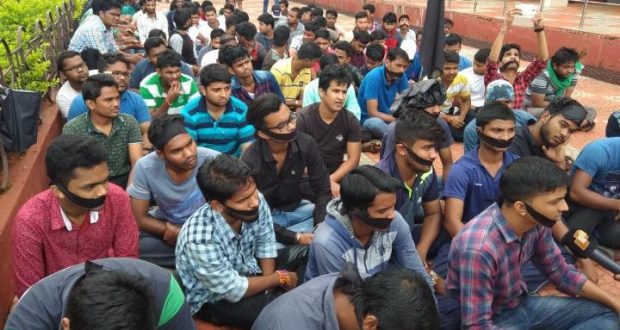 in District Diary August 29, 2018 Comments Off on Students of the Central University of Odisha boycotted the 10th Foundation Day function 1,380 Views

Koraput: Scores of students of the Central University of Orissa (CUO) in Koraput on Wednesday boycotted the 10th Foundation Day function of the varsity by observing it as a black day.

Koraput:29/8/18 :Scores of students of the Central University of Orissa (CUO) in Koraput on Wednesday boycotted the 10th Foundation Day function of the varsity by observing it as a black day.

The students also launched a protest the CUO authorities for failing to address their long-standing demands.

The agitating students were seen wearing black badges and their mouths taped with black cloths. They took out a rally in the CUO Sunabeda Campus premises with shouting slogans and staged a sit-in at the event venue.

When asked, some students alleged that the varsity authorities have hardly fulfilled the 60-point charter demanded which was given to them during the previous protest, a couple of months ago.

Despite of repeated requests, reminders followed by protests neither the CUO vice-Chancellor nor the authorities paid heed towards our 60-point charter demands, the students further alleged.

As per available information, CUO vice-Chancellor Sachidananda Mohanty tried to hold talks with the agitating students in the presence of police nut the discussion remained inconclusive.