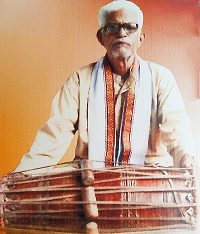 Guru Maguni Charan Das was a dominant figure in the field of Gotipua tradition, son of  Kulamani and  Damayanti Das, he was born on 5th August 1921 in the Raghurajpur village in Puri district, famous as the birthplace of his contemporary, the legendary Odissi Guru Kelucharan  Mohapatra.

At the age of 10, while attending the village school he was attracted to the singing and dancing of the gotipuas during the rehearsals on the premises of Gopinath Temple right in front of his school. In course of time, he learned to sing, play the mardal and picked up some dance too. An opportunity came to join the group at the age of twelve when Agadhu Maharana, the mardala player, left to join Mohan Sundar Dev Goswami‘s rasa Leela party, Maguni Das played the mardala. 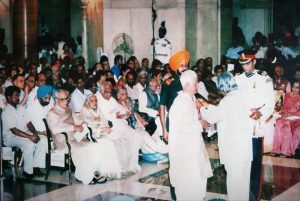 Shri Maharana decided to return to the village and, with the help of Shri Das, revived the gotipua troupe. Shri Das recruited several pupils and established Dasabhuja Gotipua Odissi Nrutya Praishad, a school for Gotipua dance where the art form is taught in the traditional Gurukul way in 1975. He is known to have contributed to the revival of Gotipua tradition, which is widely considered the precursor of the classical dance form of Odissi. His style of performance is known as the Raghurajpur Gharana of Gotipua and his school provides training in the dance discipline while taking care of the academic education of the students. 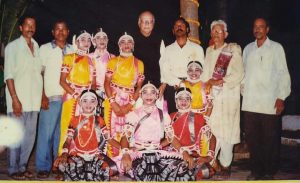 With recruitment of talented dancers and encouragement from Dhriendranath Pattnaik(who had come to him for his research),  he revived many of his old gotipua items and bandha nrutya in a big way. He has trained several generations of Gotipuas, out of which Shri lingaraj Barik and Maguni Jena are leading gurus of their generation. in a rare gesture,INTACH has constructed a building for him in his village for the training and accommodation of Gotipuas.

Guru Maguni Charan Das has received many awards for his lifelong contribution including Odisha Sangeet Natak Akademi Award in 1991, Guru Kelucharan Mohapatra Award in recognition of his services given under the category of an eminent person in Dance for the year 1995, Tulsi Samman by the  Government of Madhya Pradesh in 1996, He has been honored by The Government of India awarded him the fourth highest civilian honour of the Padma Shri, in 2004, for his contributions to the Gotipua dance. He left for his heavenly abode on 5th December 2008. 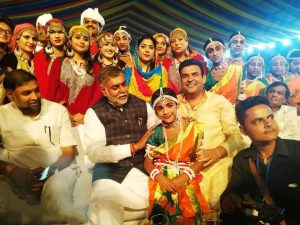 The living tradition of Gotipua originated in one of the most popular pilgrimage centers of India, Puri, in the Indian state of Orissa. The Gotipua dance emerged in the early 16th century and what makes it unique is that its performers are pre-puberty boys (age 3 to 12), dressed in female attires. Watching Gotipua dancers perform is an important learning experience for Odissi trainees because most of the aspects of Odissi have been taken from the Gotipua dance.

One theory states that with the coming of Mughals, the Devdasi system gradually declined. To carry forward the legacy, the temple priests and elite people chose boys from poor families to dance for the deity. The other story is related to the most famous Bhakti saint of this region, Chaitanya Mahaprabhu, who wanted dance troupes to perform in the procession of Lord Jagannath. However, the priests refused his request because they believed ‘devadasis ‘ could not perform the dance during their menstrual period as it would make the ceremony impure. So eventually, young boys were chosen to dance for the deity. 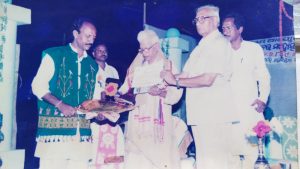 During this time, Orissa was also going through a lot of social and political changes. Both the Mughal and the Afghans were trying to seize power in this state. It is said that to fight against them, ‘akhadas’ were constructed, in which the young boys were given physical training to become fighters. They were even trained in dancing to make them a part of the temples so that they could protect the temples of Orissa from external threats. And thus, the tradition of Gotipua came into existence. The boys are chosen exclusively from very poor families at a very young age and then they are trained under expert gurus (maestro), following rigorous training

Generally, the training process includes sessions of yoga, massages, acrobatic exercises, formal schoolwork, and hours of rigorous practice. Families consider it great respect if their child is selected to be a Gotipua, who is hence also known as ‘god’s own children’. In Oriya, “Goti” means ‘single’ and “pua” means ‘boy’. Contrary to the name ‘single boy’, Gotipua dance is performed in groups. While most of the elements of this dance can be closely related to Odissi, this dance form gives a special place to acrobatics where yogic postures and special ‘mudras’ are enacted. 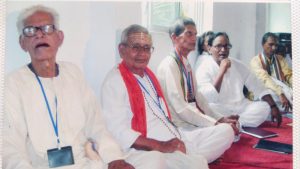 The dance performance is supported by music that consists of Mardala (two heads drum, rhythm percussion instrument indigenous to Orissa), Gini (small cymbals), harmonium, violin, Bansuri (flute) and one or two vocalists. The costume and make-up of the boys are considered sacred and have evolved in the last 50 years. The dancers wear jewellery made with beads, bracelets, and ornaments along with brightly coloured traditional dress called ‘Kanchula’. As a tradition, Gotipua inherently highlights the belief and ethos of the Hindu philosophy. By temporarily taking a transgender identity, Gotipuas represent the nature (Lila) of the Supreme Lord, who just works through its thousands of manifestations on this Earth in the form of human beings.

2022-12-23
Editor in chief
Previous: Odisha Chief Minister inaugurated and laid the foundation stones for 191 development projects worth over Rs 1,806 Cr in Balasore.
Next: Cabinet approves Minimum Support prices for copra for 2023 season