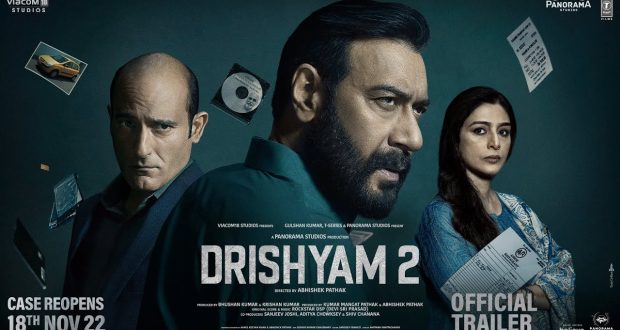 Mumbai:11/12/22:Actor Ajay Devgn and Tabu-led thriller Drishyam 2 has minted over Rs 200 cr at the domestic box office. With this number, the film has become the third Hindi film this year to achieve the figure after Brahmastra and The Kashmir Files.

The thriller, which was released on November 18, had a comfortable run at the box office. Till Friday, Drishyam 2 had minted Rs 198.93 crore and according to a report in Bollywood Hungama, the film’s fourth Saturday collections were “upwards of Rs 4 crore”, ensuring that it would be “yet another entry of the year into the 200 crore club”, reports Indian Express.

Drishyam 2 featured Ajay Devgn, Shriya Saran, Ishita Dutta, Mrunal Jadhav, Rajat Kapoor and Tabu, reprising their roles from the first part of the thriller. The new addition in the film is actor Akshaye Khanna, who plays a cop.

The film is a remake of the acclaimed Malayalam film of the same name starring Mohanlal. In an interview, the director shared that a lazy remake, which just relies on the original “frame to frame”, will not work at the box office.

“If you want to make that (same) film, just take the rights, dub it and release it. Don’t do frame to frame, because then what are you adding to it as a director? Don’t think like a remake, just take it as a screenplay, forget a film and just make yours. I have seen a lot of times people end up making frame-to-frame remakes,” he had said.

2022-12-11
Editor in chief
Previous: Finance Track core of the G20 process and provides an effective forum for global economic discourse and policy coordination
Next: Government of India has felicitated Odisha for achieving the target of December 2022 for the operationalisation of Health and Wellness Centers