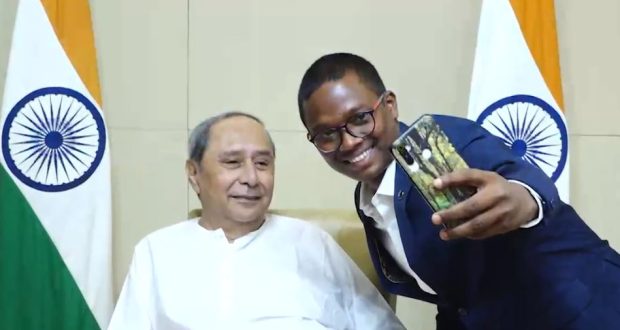 Bhubaneswar:9/12/22: Chief Minister Naveen Patnaik on Friday met tribal student Ifu Mallick, whose MBBS course fee is sponsored by the state government, at his residence in the capital city Bhubaneswar. Ifu came to meet Patnaik to express his gratitude as Odisha Government had sanctioned Rs 62,950 towards the expenses for pursuing 1st year of MBBS course in Saheed Lakshman Nayak (SLN) Medical College and Hospital in Koraput district.On this occasion, Patnaik congratulated him and appreciated his talent. Patnaik also encouraged him to continue such endeavors and serve the countrymen.Ifu was happy meeting the Chief Minister and clicked selfies with him. He assured Patnaik that he will be a good doctor and attend the people in distress and need.Patnaik gifted him a book and a smart phone.

“It was a great honour to meet Chief Minister Naveen Patnaik. He is an epitome of simplicity. When I was clicking a selfie, he saw a crack on my phone’s screen and gifted me a new phone. I will never forget this moment in my life,” said Ifu.5T Secretary VK Pandian was also present during the meeting.It is worth mentioning that Ifu Mallik is a poor tribal youth of Baliguda area in Kandhamal district. Despite many adversities, Ifu cleared the prestigious NEET examination.But being poverty stricken, he was skeptical about pursuing the MBBS course.After learning about it from social media, the Chief Minister announced that the state government would pay all the necessary expenses for his medical studies and expressed his desire to meet Ifu personally.Pandian also had a telephonic conversation with Ifu.Following the CM’s direction, the ST & SC Department released funds for the course within six hours.