Top Headlines
Home » National » In Gujarat, the incumbent Bharatiya Janata Party has so far bagged close to 53 per cent of the vote share 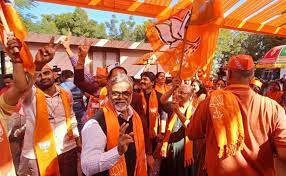 in National December 8, 2022 Comments Off on In Gujarat, the incumbent Bharatiya Janata Party has so far bagged close to 53 per cent of the vote share 68 Views

New Delhi:8/12/22: In Gujarat, the incumbent Bharatiya Janata Party has so far bagged close to 53 per cent of the vote share, up from 49.1 in the 2017 state elections when it won 99 seats and formed the government. The Congress is struggling to cross 27 per cent, a huge drop from 41.4 per cent last time, current trends from vote counting show. Congress won 77 seats last time.

The Aam Aadmi Party, having lost their deposit in all seats they contested in the 2017 Gujarat Assembly elections, is close to 13 per cent vote share so far. Though a far cry from their claims of replacing Congress and even forming the government in the state, it will become a national party if it wins just two seats and has a vote share of over 6 per cent. With just 24,918 votes, AAP had 0.1 per cent vote share the last time.

While most exit polls predicted that AAP will not cross the mark of 15, the party finding a foothold in the state could mark a change in the binary politics of Gujarat. Party chief Arvind Kejriwal had said that winning 15-20 per cent vote in Gujarat would be a big achievement for a party which celebrated its 10th birthday last month.

The Congress switched off its clock which was counting down to “parivartan” or a change in government, set up reportedly when the elections were announced. It had slots for days, hour, minute, and seconds. It was switched off around 11.20 am.The new BJP government in Gujarat is set to take oath on December 11 or 12, according to sources.

2022-12-08
Editor in chief
Previous: QUEST Alliance has organised a training for 950 teachers to enabling them ready for the 21st century classroom
Next: Noted tabla player Pandit Umesh Chandra Kar passed away