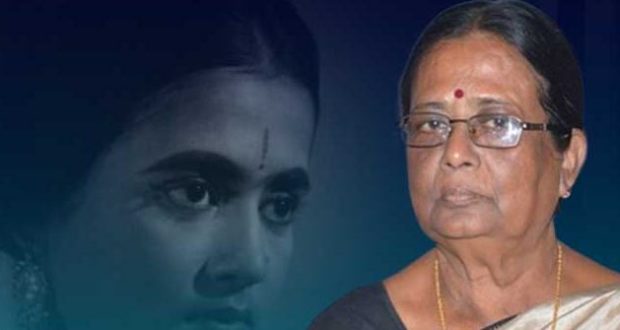 Cuttack:2/12/22:   Legendary Ollywood actress Jharana Das passed away at her residence at Chandi Road in Cuttack late Thursday night. She was 82.
According to sources, Das had been suffering from old age ailments for quite a long. She will continue to live on in the hearts of her fans for her films like ‘Shree Jagannath’,  ‘Adinamegha’, ‘Hisabnikas’, ‘Pujafula’, ‘Amadabata’, ‘Abhinetri’, ‘Malajanha’ and ‘Heera Nella’.

She was born in 1945 in a Christian family in Cuttack. She is the first orthodox actress to graduate. She married cinematographer Deepak Das. she started her acting career as a child artiste with All India Radio, Cuttack. Her fans still remember her sweet voice and her portrayal of different characters. After her stint with AIR, Jharana Das continued to entertain her fans through performances on the silver screen. She also learned Odissi dance. She had the opportunity to learn the classical dance form under the tutelage of legend Guru Kelucharan Mohapatra. She was also honoured with Guru Kelucharan Mohapatra Award for lifetime achievement in 2016. She was awarded the prestigious ‘Jayadev Puraskar’ by the State Government for her contribution to the Odia film industry.

Chief Minister Naveen Patnaik has expressed deep grief over the demise of veteran Odia film actress Jharana Das. In a condolence message, Patnaik has described Das as a renowned artist. Her impressive performance in various roles in both stage and film along with Akashvai brought her immense popularity. Das’ voice and amazing acting gave her a huge reputation as a legendary actress in the cinema. The Chief Minister said that her departure has created a huge void in the Odia film and culture industry. The Chief Minister expressed his deepest condolences to the bereaved family and wished peace for the departed soul. He announced that Das’ last rites will be done with full state honours.

Jharana Das was born in Chandini Chowk of Cuttack city. In 1945 A.D. in a Christian youth family. Everyone was calling him Jhumu. There were ten brothers and sisters in the house of Jharana. The plays written by his mother were staged at home by the brothers and sisters by pulling on a bedsheet and a sareeJharana Das made her debut as a heroine in a play by Narasimha Mahapatra. Her elder brother’s close friend Akshay Mohanty (Kashyap)  wanted Jhumu to become an actress. Some of the talents of being an artist can be seen from childhood the instigation of actor Akshay Mohanty (Kashyap), musician Akshay Mohanty and director Nitai Palit, his family allowed him to act in cinema. He entered the world of orthodox cinema through the 1964 film Amda Bat. She gained popularity by playing the role of Sati in the 1965 film Malajahan. Apart from films, he has also been involved in audio and television.