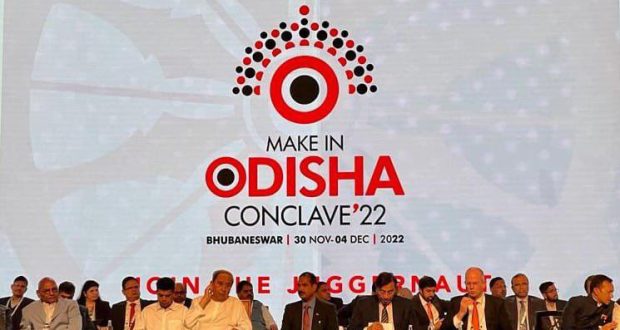 in State News December 1, 2022 Comments Off on Electronics And IT Focused Business Leadership Talk Witnesses Overwhelming Response at the ongoing Make in Odisha Conclave 2022 90 Views

Bhubaneswar:1/12/22: In a hall buzzing with palpable excitement and apparent curiosity of audience, an electronics and IT-focused Business Leadership Talk concluded to thunderous applause at the ongoing Make in Odisha Conclave 2022. The one-hour event witnessed insightful speeches from some of the most prominent names from the Indian technological ecosystem and the exchange of MoUs with some of the biggest companies in the electronics and IT sphere.

The event acquired an aura of buoyancy at the start itself when a short video showcasing Odisha’s evolution and transformation into a major tech hub was displayed. Shri Manoj Kumar Mishra, Secretary E&IT, and Shri Manas Panda, Director STPI, also highlighted this transformation in their respective addresses.

Addressing the gathering, Manoj Mishra said, “This is new Odisha where we treat governance as a business model. IT has played an instrumental role in improving the lives of the people in the state and very few sectors can match the multiplier effect IT has on any economy”.

As the highlight of the event, the eminent industry leaders gave thematic speeches focused on the future technological and investment possibilities in electronics and IT in these constantly changing times.

Ajai Chowdhry, co-founder of HCL, talked about the ways and the need for India to transform itself into a leading product nation. “India can lead the way in product design and must focus on preparing products that are repairable and upgradable. Great opportunities exist in the manufacturing of semiconductors, laptops, drones, and medical devices,” he told the audience.

Nivruti Rai, Head Intel India, expounded on the criticality of building a thriving semiconductor industry. Particularly emphasizing the role of semiconductors on the growth of any economy, she remarked, “to achieve a 5 trillion USD economy, India should focus on merging its digital and physical world. On its part, Odisha should develop a collaborative semiconductor ecosystem as a semiconductor is the ‘new oil’ and governs every aspect of life”.

Speaking on the important role IT can play in digital governance, Atul Dhawan, Chairperson Deloitte, called Odisha “a role model in e-governance” and praised the state’s 5T charter of governance which has technology as one of its central tenets.

PrativaMohapatra, MD and VP, Adobe India, deliberated on Web 3.0 and the revolutionary impact it can have on IT and our lives. “Web 3.0 democratizes ownership. In future, we will have metaverse hubs and we as users will be sitting in them” she stated.

After the speeches, a Q&A session showcased the inquisitive spirit of the participants who asked thought-provoking questions from the speakers and received some very thoughtful responses from them.

The event concluded with the presentation of mementos to distinguished speakers by Secretary E&IT and a vote of thanks.

In another highlight, MoUs with Intel, Adobe, and EPIC Foundation were also exchanged during the event. These MoUs cover a range of collaboration areas between the Odisha Government and these companies and are part of the Odisha Government’s larger efforts to make Odisha one of India’s preeminent electronics and IT states. As per discussions, EPIC Foundation is likely to invest Rs 500 crores in Odisha directed towards boosting the state’s capacity in the manufacturing of electronics products such as Tablet-PCs.

Adobe is expected to invest Rs 100 crores towards improving the digital literacy skills of educators in educational institutions in Odisha. This will create 1000 jobs every year in high-skill domains.

Intel and the Government are likely to collaborate in a range of areas such as improving the state’s digital readiness, catalyzing its efforts to improve digital connectivity, and increasing its exposure to emerging technologies. Their likely investment of Rs 50 crores will create 1000 high-skill jobs every year.

Recently, Deloitte also announced the establishment of a Development Centre in the state which is expected to create employment for approximately 1500 people and generate revenue in excess of Rs 600 crore by 2024.

Commenting on the understanding reached between her company and the Odisha Government, Ms. Prativa Mohapatra, MD and VP, Adobe India, said, “The profound changes of the past few years have catalysed the growth of the ‘digital economy’ and the ‘creator economy’ in India and made Adobe’s mission of changing the world through digital experiences more relevant than ever. We are the digital experiences leader, enabling the lives of all – from students, governments to small businesses and the largest multinational enterprises – to create and deliver the world’s best digital experiences.”

“Digital creativity has become an incredible power and opportunity today, in aiding creators to engage with their audience more effectively, in revamping the education system with creative classrooms, and in providing a key differentiator for businesses to leverage newer ideas to inspire, communicate and connect with their customers. Given this potential, it is imperative to foster digital and creative skills in our youth for the future. Our Memorandum of Understanding with the Government of Odisha is an important step in this direction, driving a strong and impactful skilling ecosystem in the state that will support in professional development of educators in higher education institutions and skilling of students in 100 schools using Adobe tools – contributing to making Odisha a supreme talent hub in the country.”

The five-day conclave which is open to the public will conclude on Sunday, December 4th with a mega-cultural event. The electronics and IT pavilion set up at Janta Maidan has become a major source of attraction for participants and visitors and is attracting huge crowds.

2022-12-01
Editor in chief
Previous: On Day two of ‘Make in Odisha Conclave 2022’ Modern Age Logistics was held in the presence of investors, interested public and officers
Next: Legendary Ollywood actress Jharana Das passed away :Her last rites will be done with full state honours