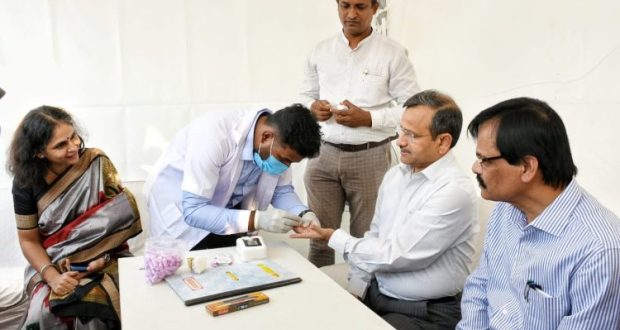 in Smartcity Bhubaneswar, State News November 28, 2022 Comments Off on Odisha  Chief Secretary has inaugurated the campaign against anemia for all officers and employees of Lokseba Bhawan 110 Views

Replying to a media query on the occasion, Chief Secretary Sri Mahapatra said that anemia is seen as a health concern across various social categories. One of the reasons for the prevalence of anemia might be the malady generally goes undiagnosed and symptoms ignored. He directed the departments of women & child development, and health & family welfare to intensify hemoglobin testing and counseling throughout the State.  Sri Mahapatra also advised all officers and employees of Lokseba Bhawan to get themselves tested and take necessary medicines in the interest of their own health.

Secretary Smt Sharma appraised that six stalls for testing of anemic level with awareness materials were set up in the lawn of the Lokseba Bhawan. Blood test reports could be given within two minutes.  Medicines were also being given free of cost in these stalls after testing. Nutrition experts were present to provide nutritional counseling. The stalls would remain open till 2nd December. With this facility around 5000 officers and employees of Lokseba Bhawan would get this facility. The stalls would operate from 11 AM to 4.30 PM daily from 28 November to 2 December of the ongoing year.

It may be pertinent here to mention that recently Chief Minister Sri Naveen Patnaik launched Anemia Mukta Lakshya Abhiyan ( AMLAN)  for the entire State to eradicate anemia from society. The departments of Health and family welfare, Women and child development, Mission shakti, Scheduled caste and scheduled tribe and minority development would implement the campaign through concerted efforts at the ground level. Around 55,000 Government and Government aided schools and 74,000 Anganwadis would be the points of service delivery.