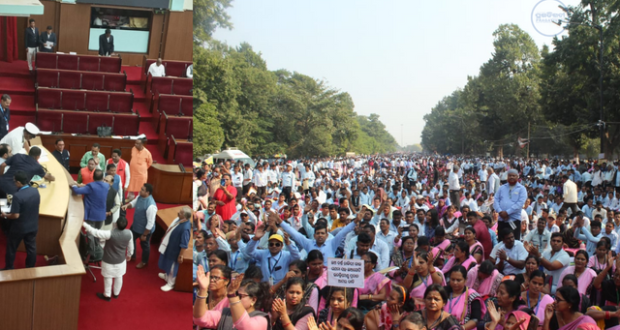 in State News November 28, 2022 Comments Off on Lending support to the primary teachers Opposition stalled the Assembly proceedings 76 Views

Bhubaneswar28/11/22:: Lending support to the primary teachers who have been on dharna pressing for several demands including regularisation of job and salary hike, the Opposition BJP and Congress on Monday stalled the Assembly proceedings accusing the government of turning a blind eye to the legitimate demands of teachers.

What irked the Opposition bench is the absence of School and Mass Education Minister Sameer Ranjan Dash in the Assembly.

The opposition members said the Minister is busy campaigning for BJD candidate in Padampur at a time, when thousands of teachers have taken to the streets in the State Capital. The issues triggered a pandemonium which washed away the Question and Zero Hours.

Soon after the Question Hour commenced, the BJP and Congress members rushed to the well of the House raising slogans against the Government. They demanded that the state government should look into the demands of the agitating teachers.

The ruckus by Opposition members didn’t subside despite repeated requests by Speaker Bikram Keshari Arukha, which forced him to adjourn the House twice i.e, till 10.32 am first and again till 11.30 am.

Similar situation also prevailed in post-lunch session as Opposition parties continued uproar on same subject following which Arukha adjourned the House again and called an all-party meet to seek cooperation from the members for smooth function of the House.

Leader of Congress Legislature Party Narasingha Mishra said that demands of primary school teachers should be reviewed thoroughly if it is justified. The Government should come to the talk table to resolve their issues. The teachers’ stir has made massive inconvenience for general public in the Capital city, he rued.

Not only teachers, but also other organisations are staging protests outside the assembly. The government should look into the matter, Mishra added.

Opposition Chief Whip and Senior BJP leader Mohan Majhi said that four days have passed since commencement of winter session, but the Mass Education minister is still absent. Therefore, the Speaker should give a ruling on the teachers’ issues.

“The education system has collapsed completely in the State. The teachers have been on dharna for last two days over their 3-point charter of demands. But, it is a matter of concern that neither the minister nor any other officials of the department are present here to discuss the matter,” Bahinipati said.

The BJD, on the other hand, downplayed the Opposition’s role in the affair. “The government is much aware of the matter. It is the BJD government which fulfilled maximum demands of various organizations. Teachers issues will also be looked into,” senior BJD MLA and former Minister Sashi Bhushan Behera said.

Taking note of the concerns of members; Speaker Bikram Keshari Arukh ruled and directed the government to give special attention to the demands of the protesting teachers.