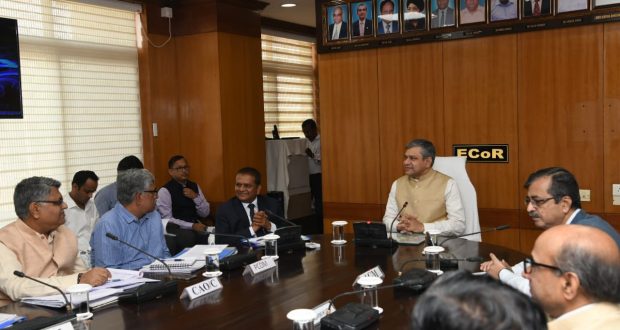 Bhubaneswar26/11/22: Good news for people of Odisha as the semi-high-speed Vande Bharat Express will be rolled out in the state very soon, announced Minister of Railways Ashwini Vaishnaw here today.

Attending Odisha Nirman Conclave-2022 organised by Kanak News in Bhubaneswar, the Union Minister said, “At present, two Vande Bharat trains are being manufactured in India. In the month of January or February, we will be manufacturing at least 4 or 5 trains a month. Under this plan, a circuit is underway in Odisha. We are examining the electrification and other essential parts for running the Vande Bharat train in the state.”, Vaishnaw, who is also the Communications and Electronics & Information Technology Minister at the Centre, announced that the much-awaited 5G network services will be launched in Odisha in first phase.“The equipment required for the 5G network in Odisha are already in place. The 5G services will be launched here within 2-3 months,” he confirmed.

He also revealed that an Express train featuring the rich and ancient culture of Lord Jagannath will be plying very soon in the state.“The Jagannath circuit has been made in Odisha and it will be launched during Ratha Jatra of Lord Jagannath,” he announced.Speaking about launching of metro train services in Odisha, Vaishnaw said, “Odisha really deserves a metro train. However, the state government has not sent any proposal regarding this to the Centre,” adding that 28 stations across Odisha will be upgraded and tender has been invited in this regard.