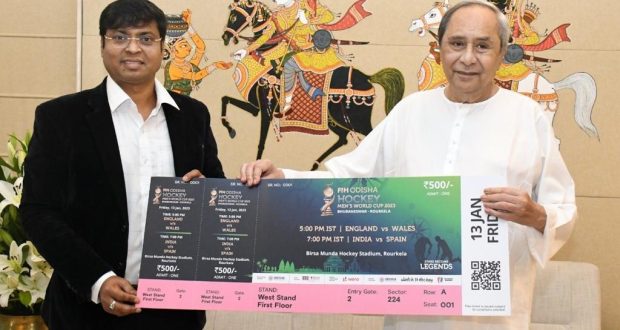 Bhubaneswar:23/11/22:Odisha Chief Minister Naveen Patnaik on Wednesday bought the first ticket of the FIH Men’s Hockey World Cup 2023 scheduled to be held in Odisha from January 13, 2023. He has paid Rs 500 for the ticket, officials said.

Hockey India President Dilip Tirkey handed over the ticket to Patnaik for the opening day matches to be played at Birsa Munda Hockey Stadium in Rourkela on January 13 next day.

The World Cup will be organised from January 13 to 29 next year at the newly constructed Birsa Munda Hockey Stadium, Rourkela and Kalinga Stadium, Bhubaneswar.

While 16 teams will participate in the prestigious world tournament, 24 matches will be played in Bhubaneswar and another 20 in Rourkela.

The online sale of tickets for the Hockey World Cup will commence soon, the official said.