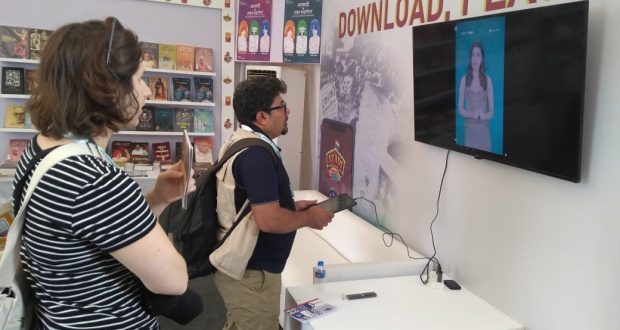 in Uncategorized November 22, 2022 Comments Off on Publications Division brings its literary treasure to 53rd IFFI 87 Views

Goa;22/11/22:Publications Division, Ministry of Information and Broadcasting, proudly showcases its books and journals at the 53rd International Film Festival of India, the most highly acclaimed film festival of the country, being held in Goa from 20th to 28th November, 2022. The Division is participating as an exhibitor in the mega-event being held at INOX, Goa. Besides that, Publications Division is also present at Film Bazaar, a widely sought after event organised by NFDC within IFFI, where it is having its sales-cum-exhibitor counter.

Continuing the celebrations of Azadi Ka Amrit Mahotsav, Publications Division brings its collection of books on history of Indian freedom struggle and freedom fighters, to captivate the minds of the visitors and event attendees. The cine lovers will also get a chance to explore the Publications Division’s books on Indian cinema, art and culture, eminent personalities, and children’s literature; along with premium books on Rashtrapati Bhawan and Prime Minister’s speeches, published exclusively by the Publications Division.

Another highlight of the Publications Division’s exhibition is the newly-launched ‘Azadi Quest’ games, developed by Ministry of Information and Broadcasting and Zynga. The Match 3 and Heroes of Bharat games are both entertaining and educational, enlightening the players about India’s freedom movement and the heroic contributions of courageous freedom fighters. The visitors will have the chance to play and download them and also win exciting prizes.

The Publications Division is exhibiting its publications at E1 Pavilion, Promenade, Film Bazaar, IFFI from 20th– 24th November, 2022 and at INOX, Goa from 20th-28th February, 2022.