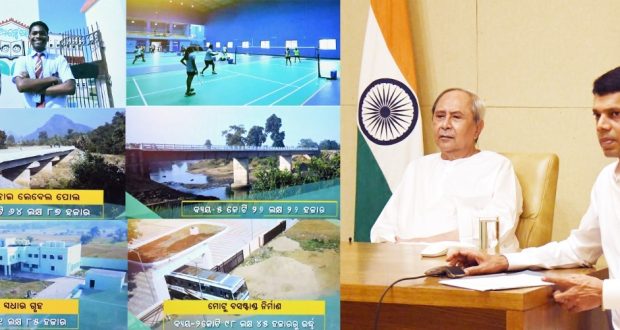 Bhubaneswar:22/11/22: Odisha  Chief Minister Naveen Patnaik today inaugurated six important development projects for Malkangiri district with Rs 25 crores investment. On this occasion, the Chief Minister said that these projects will further lead to the social and economic development of the district.

Inaugurating the project through video conferencing, the Chief Minister said that Malkangiri has always been special to him.

“Malkangiri’s development work gives me the greatest joy. I have full faith, the identity of Malkangiri will be more brighter in the future. Malkangiri will further strengthen its position on the development map as a leading district in the state,” said CM Naveen Patnaik.

Among the projects inaugurated today are – two hostels for Scheduled Tribe/Scheduled Caste student studying under the Anwesha Scheme. The hostels can accommodate 600 boys and 600 girls; Biju Patnaik Interstate Bus Terminal at Motu Tri Junction. It has facilitated transit to the district as well as Chhattisgarh and Andhra Pradesh; In addition, a high-level bridge connecting Malkangiri’s Bonda area and Biju Bridge over the Tamsa river at Balimela, a judo academy for sports development and a correctional home for juveniles.

The Chief Minister highly appreciated the rapid development program in Malkangiri district. He said that the people of Malkangiri are connected with development today. Patnaik said, “Your cooperation in development work has always encouraged us. Education and awareness has been disseminated throughout the district. Communication has improved. It is a good thing that you are taking advantage of various welfare schemes starting from Biju Swasthya Kalyan Yojana.” He further stated that the success of Malkangari’s successful farmers, mothers of Mission Shakti, students, youth – all these have brought a new identity to the district today.

Citing the example of Karma Muduli, a girl from Bonda Ghati studying in the best government women’s university in Bhubaneswar, the Chief Minister said that education brings opportunities and education has brought about this transformation. He advised the present students to create an identity for themselves by availing education.

On this occasion, Chitrakonda MLA Mr. Puranchandra Baka and District Council Chairperson Mrs. Samari Tangalu delivered keynote speeches and praised the strong leadership of the Chief Minister for the rapid development of Malkangiri district. Secretary to CM (5T) V.K. Pandian coordinated the program while Principal Secretaries and Secretaries of various departments were present in the meeting.

2022-11-22
Editor in chief
Previous: Union Minister Dharmendra Pradhan inaugurated the second phase of the employment fair in Bhubaneswar:
Next: 60,000 Anganwadi centers across Odisha are closed down due to undefinite agitation of Anganwadi workers