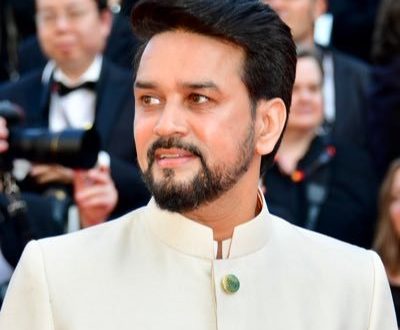 Newdelhi:19/11/22:Union Minister for Information & Broadcasting and Youth affairs & Sports, Anurag Singh Thakur will be on tour to Goa for two days from 20th November to 21st November 2022 to attend the inaugural ceremony of 53rd edition of International Film Festival of India and various other events at IFFI 53.

On 20th November Minister Thakur will attend Red Carpet of the Opening Film of the 53rd edition of IFFI Alma and Oskar, by Austrian Director Dieter Berner. Later that evening he proceeds to Dr. Shyama Prasad Mukherjee Indoor stadium to attend the opening ceremony of IFFI 53. Minister will be announcing the winner of the Indian Film Personality of the Year 2022 and will also confer Satyajit Ray Lifetime Achievement on Spanish film Director Carlos Saura at the IFFI 53 inaugural.

On the second day of his visit, the Minister will participate in the opening Ceremony of 2nd Edition of 75 Creative Minds of Tomorrow Section of IFFI 53 where he will be interacting with 75 young promising cinematic talents from across India. Shri Thakur will later attend the inaugural Ceremony of Film Bazaar pavilion of IFFI 53. Following this, he will attend the Indian Panorama Section and opening Ceremony of Country Focus (France) section of the film festival.

Minister Anurag Singh will wrap his two day visit to Goa with the inauguration of Film Technology Exhibition by FTII at Football Ground, DB Road, Panjim. This exhibition showcases the technology and various elements pertaining to film art/cinema and aesthetics.