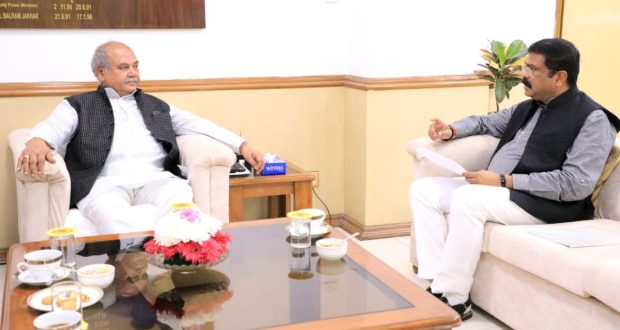 in National, State News November 16, 2022 Comments Off on Dharmendra Pradhan met Narendra Singh Tomar and apprised him about the irregularities in the implementation of PMFBY in Odisha 116 Views

The petitioners have mentioned that M/s. HDFC Ergo General Insurance Company Limited, a private insurance company entrusted with the responsibility of crop insurance under PMFBY by Government of Odisha in the Paikamal, Jharbandh, Padmapur, Gaisilat, Sohela and Bijepur Blocks of Bargarh District has paid abysmally low insurance sum against the crop loss due to drought situation during Kharif 2021 season. The reported low payment of insured sums is arising due to faulty Crop Cutting Experiments (CCE) data provided by the officials of Government of Odisha and manipulation of CCE yield data by the insurance company.

In Odisha, the responsibility of smooth conducting CCEs are assigned to officials of Revenue & Disaster Management Department, Agriculture and Farmer’s Empowerment Department and Planning and Convergence Department with its supervision being the responsibility of that of an ADM Ranking Officer. Sadly, CCEs have been conducted unscientifically without usage of proper technology to suit the insurance companies in a possible case of collusion between private insurance companies and government officials. Resultantly, in some Gram Panchayats, the payout rate is as low as 5% against expected pay rate of 76.56%.

The petitioners have also alleged that these private insurance companies have manipulated the crop cutting experiment data in collusion with officials of Government of Odisha resulting in lower-than-expected insurance pay out. The ineffectiveness of the local administration and cunning tactics of the M/s HDFC Ergo General Insurance Company is derailing the implementation of PMFBY in Bargarh District.

Keeping in mind the severity of this scam and the urgent need to provide justice to the aggrieved farmers, Pradhan urged Tomar to investigate the matter at his personal level and order for a proper investigation towards the functioning of PMFBY and alleged malpractices by the Officials of Government of Odisha during the CCEs and conduct of private insurance companies empanelled in PMFBY Scheme in the state of Odisha, especially in Bargarh District. 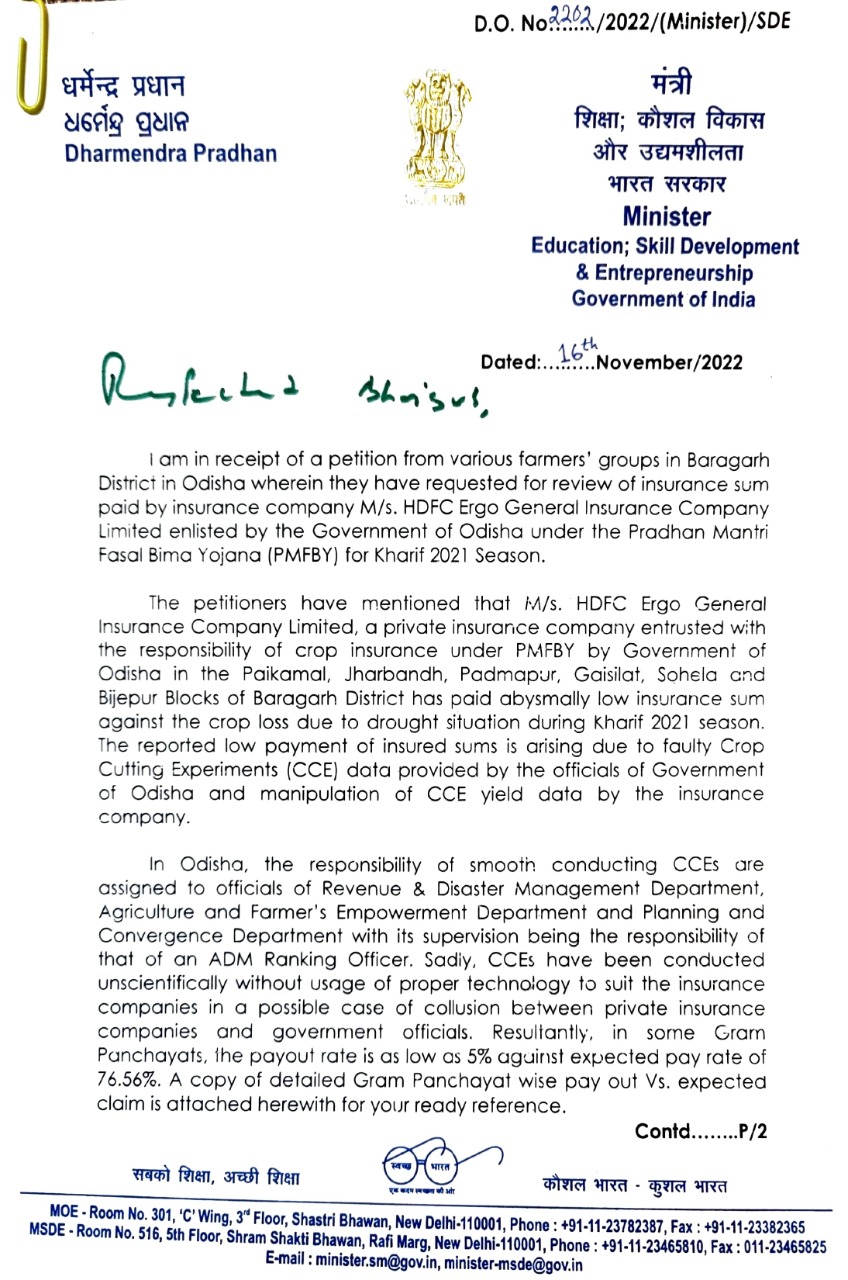 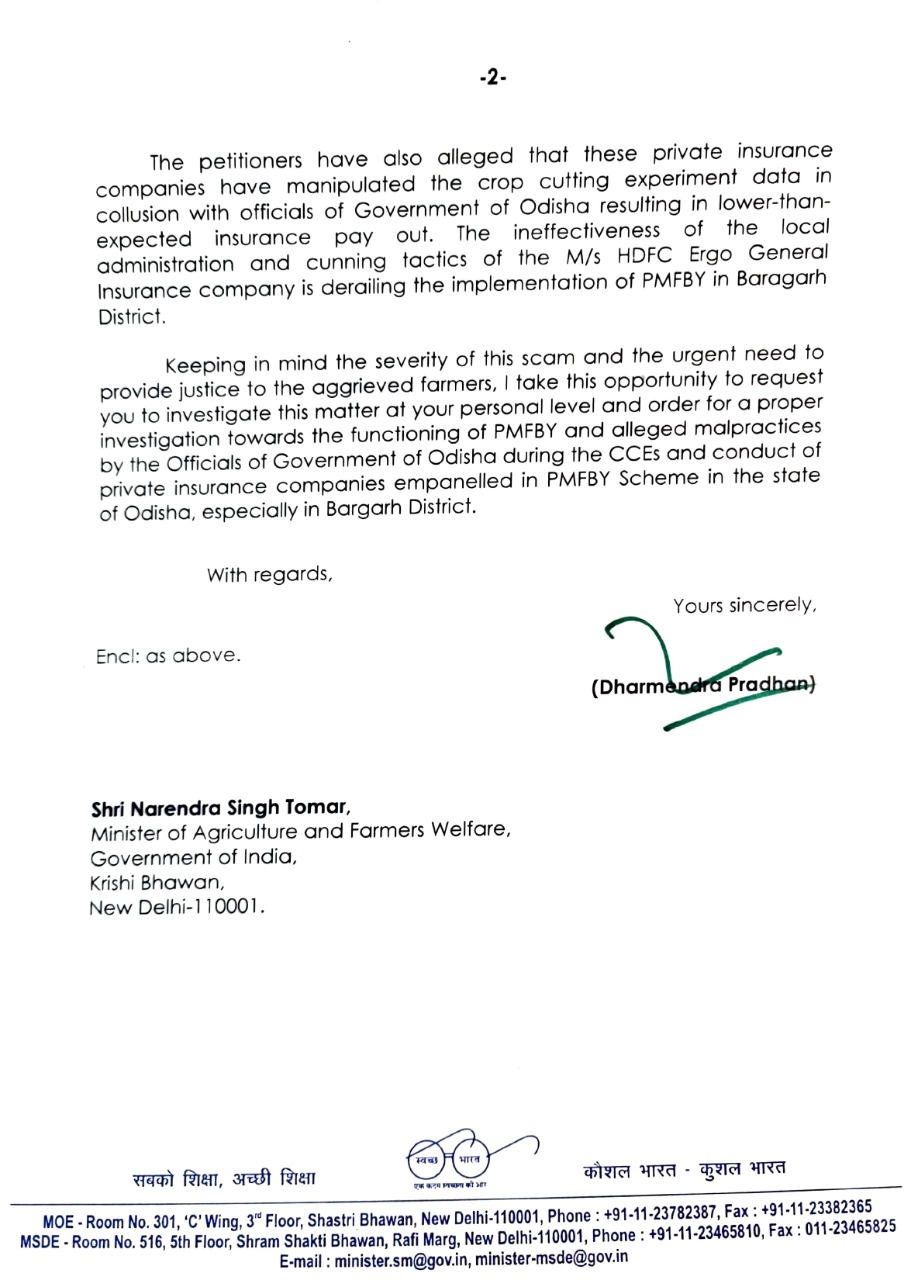 2022-11-16
Editor in chief
Previous: Odisha Chief Minister Naveen Patnaik launched the Chief Minister’s Award for Education
Next: Cuttack Bali Yatra has made it to the Guiness Book of World Records after students from 22 educational institutions successfully made 23,000 paper boats in 35 minutes