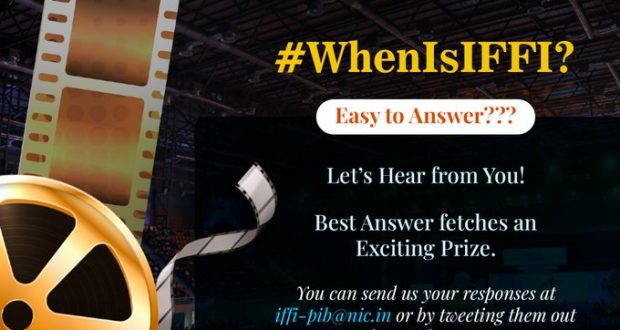 in Column 27 days ago Comments Off on #WhenIsIFFI? 63 Views

When? IFFI? If you are not quite like us yet, you may be asking what precisely is IFFI. If you find yourself asking this, we are more than happy to inform you, dear reader, that the palindromic acronym stands for the International Film Festival of India.

Founded in 1952, IFFI is one of the most significant film festivals in Asia. Held annually, currently in the tourist state of Goa, the idea of the International Film Festival of India is to celebrate films, the stories they tell and the people behind them. By doing so, we seek to nurture, promote and spread the enlightened appreciation and ardent love for films – far, wide and deep; to build bridges of love, understanding and fraternity among peoples; and to inspire them to scale new peaks of individual and collective excellence.

The festival pursues these aims by providing a common platform for the cinemas of the world, enabling them to project the excellence of film art; thus contributing to the understanding and appreciation of film cultures of different nations in the context of their social and cultural ethos; and thereby promoting friendship and cooperation among the people of the world.

And yes, it is crucial to note that the festival is conducted by the government. It is held every year by the Ministry of Information and Broadcasting, Government of India in collaboration with the Entertainment Society of Goa, Government of Goa, the host state. While the Directorate of Film Festivals (DFF) in the Ministry of Information and Broadcasting has generally been spearheading the festival, consequent to the merger of film media units with the National Film Development Corporation (NFDC), NFDC has taken over the conduct of the festival.

Held in Goa for the first time in 2004, the festival has since found a home in the coastal state, returning here every year. And in 2014, Goa was declared the permanent venue for IFFI.

Ok, ok; let us come back to where we began; so, you already knew about IFFI, or at least now you know about it. So, you say, come on, why are we the festival organizers ourselves asking what seems like a most basic question? Surely, IFFI is being held every year during November 20 – 28, you say. Don’t we know that? Isn’t that known and obvious? Then, why this question, that too from the festival organizers?

Well, dear film lovers, cinema enthusiasts, art connoisseurs and celebrants of life, aren’t the most basic questions the most interesting as well as important ones? Moreover, especially in our capacity as public servants entrusted with the celebration of great art, we believe that it is not enough to have correct answers; you would agree that it would be far more helpful to have answers which are good and better. The confidence of having found the correct answer can prevent us from exploring further, it can stand in the way of better, maybe more correct, answers and even better questions. What say?

Let’s Hear from You! Best Answer Fetches an Exciting Prize…

In this spirit, we would welcome public responses to the question we have been reflecting on: #WhenIsIFFI? You can send us your responses at iffi-pib[at]nic[dot]in; better still, share them with the world, by tweeting them out (do remember to use the hashtag #WhenIsIFFI, so we don’t miss your answer).

Remember what we told you, we are looking for good and better answers, not just merely correct answers. And tell you what, we will go through the answers received via email and on Twitter and select one answer to be the best; and the person who sent this answer will receive an exciting prize from us. Moreover, if you are coming down to Goa to attend IFFI, which we hope you are, you can receive this prize from us in person.

And yes, along with the best answers submitted by you, we will share with you what inspired us to ask this most basic of questions: #WhenIsIFFI?

Stay tuned, let us keep drinking copiously from the cup of cinematic celebration…and also sharing the joy of it.

2022-11-10
Editor in chief
Previous: Govt. of Odisha signed an MoU with Tata Steel Foundation for implementing the JAGA Mission across five municipal corporations
Next: Odisha Chief Minister has ordered to fill the vacant posts of teachers in various government high schools of the state 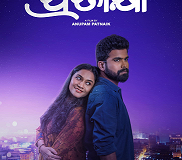 Odia Cinema in Indian Panorama :From” Seeta Rati” to” Pratikshya’