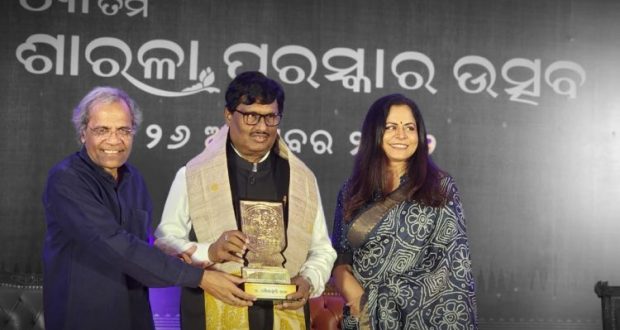 The award was handed over in a ceremony organized by IMPaCT, the CSR wing of the IMFA. Das received the award for his short-story collection “Bagha O Anyanya Galpa”, published by Timepass Publication in 2018.

He received a cash prize of Rs 5 lakh along with a citation.

Das had also received the Sahitya Akademi Award in 2012. He had also received the Sahitya Akademi Translation Prize for the year 2021 for ‘Chheli Chareibara Dina’ for his Odia translation of Malyalam novel ‘Aadujeevitham’ (Goat Days) by Uday Parkash.. Including this, he has six transalations to his credit besides, several novels, travelogues and short stories.

Apart from this, London-based eminent painter and writer Prafulla Mohanty and Odissi music Guru Ghanshyam Panda were honoured with ‘Ila-Bansidhar Panda Kala Samman’ for their valuable contribution in the field of art and music, respectively. Both received a cash award of Rs1.5 Lakh each and citations.

The annual Sarala Puraskar was instituted by eminent Odia industrialist Dr Bansidhar Panda and his wife Ila Panda in 1980. The Indian Metals Public Charitable Trust (IMPaCT ) has since been continuously awarding eminent personalities for excellence in Odia literature.

2022-10-27
Editor in chief
Previous: Mo Seva Kendras have also started a facility for High-Security Registration Plate (HSRP) booking across the state
Next: Odia films ‘Rudrani’ and ‘Tu Mora Ok’ has been released across the state