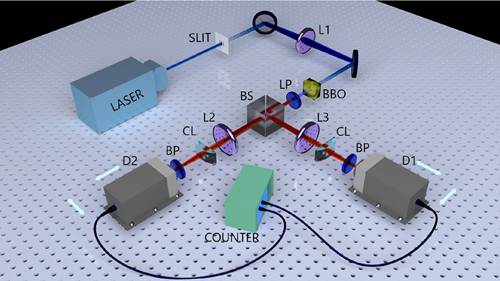 Newdelhi:10/10/22:Experiments on the quantum entanglement (where several particles behave like a single unit even when they are separated), which received the Nobel Prize in Physics in 2022 has seen a major achievement by Indian scientists, who have found a simpler way to quantify the amount of entanglement in higher dimensional systems.

The study could help potentially enable better assessment of the efficacy of an entangled state for technological applications like quantum teleportation (a technique for transferring quantum information from a sender at one location to a receiver some distance away) where the success and accuracy of the process depends on the amount of entanglement as well as other quantum communication protocols.

Entangled state is a crucial state of quantum mechanics and can be used as a resource for quantum communication, quantum computation and information processing tasks that are impossible for classical systems. Higher dimensional systems (dimension greater than two) are proven to have advantages in both quantum computing and quantum communications. Thus experimentally realising higher-dimensional entangled states along with the studies of quantification of the entanglement are of critical importance.

So far, all the relevant investigations towards quantifying entanglement mainly focused on providing bounds (maximum/minimum) on entanglement measures. The existing method of characterising quantum state is Quantum State Tomography (QST), which can then be used to quantify entanglement. It requires determination of an increasingly large number of parameters as the dimension of the system grows. A method for empirical estimation of entanglement for any arbitrary dimensional entangled state was not available.

The scientists from Raman Research Institute (RRI), an autonomous Institute of the Department of Science and Technology, in a collaborative effort with scientists from the Institute for Quantum Computing, Canada have formulated analytical relations between statistical correlation measures and known entanglement measures for any arbitrary dimension. By using just two sets of measurements, they have experimentally quantified the amount of entanglement in a pair of three-dimensional photonic qutrits at the Quantum Information and Computing lab at RRI, headed by Prof. Urbasi Sinha.

Their research published in the journal Quantum Science and Technology gives a more experimentally friendly and less cumbersome alternative to QST. It explores the percentage deviation of the entanglement of the given state from the maximally (100% entangled ) entangled state as quantified by two different entanglement measures. For the first time, it experimentally demonstrates this non-equivalence between different measures of entanglement in higher dimensional quantum state.

The results can usher in a line of studies which can aim to shed light not only on deeper understanding of how entanglement is to be quantified but also on how to better assess the efficacy of an entangled state for a given technological application.

The central technological importance of the research rests in the context of quantum entanglement-enabled information processing, quantum computing and quantum communication protocols, which lie at the heart of 21st-century quantum technologies. For applications in quantum teleportation and remote state preparation, the fidelity of the process depends on the amount of entanglement given by a relevant entanglement measure. Hence, given any experimentally prepared entangled state, an a priori assessment of how much entangled the state is critically helpful. It is precisely this requirement which is addressed in this research.

2022-10-10
Editor in chief
Previous: Department for Promotion of Industry and Internal Trade hosts Conference on B20 Indonesia Global Dialogue
Next: Odisha Chief Secretary advised the officials to make all arrangements for the ongoing cyclone season in State