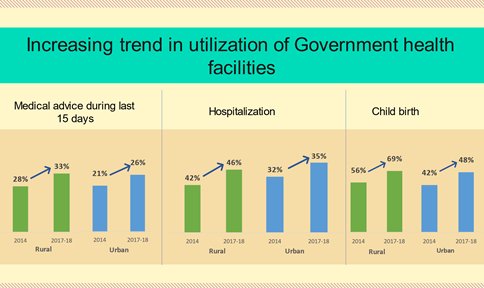 Newdelhi:7/10/22:The news report suggesting inaccuracies in National Health Accounts (NHA) especially out-of-pocket expenditure reduction claims is misleading and incorrect. National Health Accounts (NHA) provide detailed information on expenditures incurred within the health sector of the country. These estimates are crucial as they are not only a reflection of the existing health system of the country but also enable the government to monitor the progress made in different health financing indicators.

The recent NHA estimates (2018-19) show a substantial reduction in out-of-pocket expenditure (OOPE), reaffirming the government’s commitment towards easing the citizens’ financial burden. Calling this data, a “mirage” by one expert of health economics working in a private Indian University and quoted in certain sections of Media, is devoid of justification & rational basis.

Let’s start with the questions raised on the very foundation of these estimates – National Statistical Organisation (NSO) data. The main source of information for OOPE was based on NSO data for 2017-18 whereas the previous estimates were based on 2014. Both the surveys of the 71st and 75th rounds use the same sampling design for the selection of households so that it ensures the comparability of both rounds.

Moreover, the 2017-18 data was a one-year survey whereas 2014 was done over a period of six months.  Given that seasonality plays an important role, the 2017-18 survey was definitely more robust than the previous survey. And, while the same experts had unequivocally accepted the 2014 data, their assessment of 2017-18 as “doubtful” is truly arbitrary.

Such criticism is based on flawed juxtaposition and selective picking of data to further their specious argument. Formulations like, “seems problematic/seems unlikely” as basis of a claim, is nothing if not hypothetical disagreement.

The increase in utilisation of government health facilities has been another important aspect of NSO 2017-18. A study by Muraleedharan et al. (2020) published in reputed Economic and Political Weekly on these NSS rounds also observes a decline in OOPE in 2017-18.

As per NSS, there has been an increase in utilisation of government facilities among those who took medical advice in last 15 days by almost 5%. In case of hospitalisation, this increase is around 4% in rural areas and 3% in urban areas. In case of childbirth, the share of government facilities has increased by 13% in rural areas and in urban areas it has increased by 6%.The government’s current health expenditure has been increasing constantly between 2013-14 and 2017-18. As a share of GDP, it has increased by more than 10 per cent for the same period.

2022-10-07
Editor in chief
Previous: Cheetah Task Force to suggest and advice on development of tourism infrastructure
Next: Shri Piyush Goyal asks FICCI to re-invent itself to become a think tank