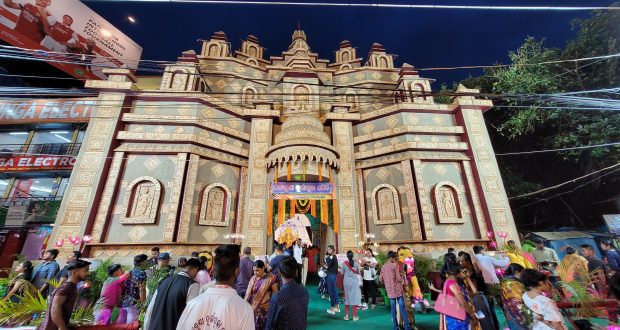 Braving downpour, people visited puja mandaps and offered prayers to Goddess Durga on the occasion of Dussehra or Vijaya Dashami festival, which celebrates the victory of good over evil.

Much zeal was marked among the people as Dussehra is being celebrated with participation of public after a gap of two years due to the COVID-19 situation in the past.

According to mythology, Goddess Durga had killed demon Mahishasura after nine nights of furious battle. The tenth day is celebrated as Vijaya Dashami or Dussehra.

Rabana Podi events have been organised by various puja committees, which will be held in the evening.

The Baramunda Durga Puja Committee has prepared an effigy of demon Rabana having a height of around 40-50 feet. The effigy will be set on fire at the Baramunda Ground here, followed by display of fireworks.

Similarly, Rabana Podi has been organised by the Barabati Sarva Dharma Sanskrutika Parishad at the Balijatra Ground in Cuttack.

The burning of the effigy symbolises victory of good over evil and marks the end of Durga Puja festival.