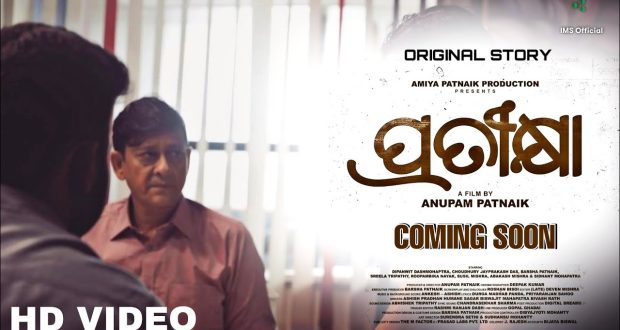 in Odia Cinema October 5, 2022 Comments Off on Odia movie ‘Pratikshya ’is all set to hit theatres in December this year. 119 Views

Bhubaneswar:5/10/22: Upcoming Odia movie ‘Pratikshya’ inspired from a short story by eminent writer Gaurahari Das, is all set to hit theatres in December this year.

Filmmaker Anupam Patnaik announced the movie’s release date with an official poster. With this, he also mentioned that they are going to release official trailer and songs of the movie soon.

Earlier, in an interview, Patnaik had mentioned that the upcoming movie would be ‘quite a relatable and emotional one, carrying the essence of Bhubaneswar.’

‘Pratikshya’ is an Amiya Patnaik production whose screenplay and dialogues are written by Roshan Bisoi. Deepak Kumar is the cinematographer while credits for editing go to late Deven Mishra. The music and background score of the movie is helmed by Ankesh-Ashish. Durga Madhab Panda and Priyaranjan Sahoo have penned the lyrics. Popular singers Ashish Pradhan, Humane Sagar, Biswajit Mahapatra and Bivash Rath will lend voices to several songs in the upcoming movie.

Intending to bring cinephiles back to theatres again, the makers of ‘Pratikshya’ had earlier announced that they will release the upcoming movie in theatres only.