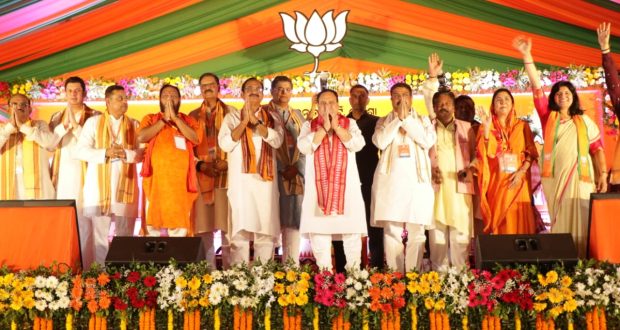 in State News September 29, 2022 Comments Off on BJP President JP Nadda has exhorted party workers to topple the BJD government in the state in 2024 elections 116 Views

Bhubaneswar29/9/22:: Bharatiya Janata Party (BJP) president JP Nadda, who is on a two-day visit to Odisha, exhorted party workers to topple the Biju Janata Dal (BJD) government in the state in 2024 elections.

Nadda urged BJP workers to make the people of Odisha aware of the developmental schemes of Prime Minister Narendra Modi’s government at the Centre and also the alleged failures of BJD government in Odisha.

The BJD government is neck-deep in corruption. Here protectors are perpetrators. At least three ministers were involved in murder cases. Ailing women are being carried to hospitals on bicycles. The state government has failed to provide ambulance service to people,” Nadda said while addressing BJP workers at an event at Janata Maidan here today.

The BJP president alleged that the BJD government has been misbranding the Pradhan Mantri Awas Yojana (PMAY) of the Union government by pasting the logo of Biju Pucca Ghar Yojana of Odisha on the newly-built houses.

“The BJD government is instrumental in depriving the benefits of Ayushman Bharat scheme to at least 60 lakh eligible families in Odisha. BJP workers should make all-out effort to dislodge the BJD government in the 2024 elections,” Nadda said.

The BJP president targeted the BJD government over its alleged reluctance to open Ratna Bhandar (treasure house) of Puri Srimandir and make an inventory of its valuables.

“Even, the Ratna Bhandar of Puri Srimandir is unsafe under the BJD rule,” he alleged.

The BJP president highlighted successful management of Covid-19 pandemic in India and provision of free vaccination for the people while enlisting the achievement of the BJP government at the Centre.

“The Centre has granted 20.5 lakh concrete houses to Odisha. Steps have been taken to provide electricity to 14.5 lakh houses in the state. At least 4.40 lakh Odia youths have been given loans. Around 4 lakh farmers have been provided assistance under PM Kisan scheme. Altogether 87 Ekalabya Schools are being set up in Odisha,” Nadda claimed.