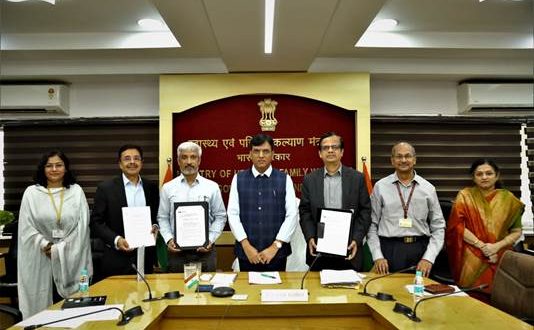 in Business September 28, 2022 Comments Off on Indian Fertiliser companies sign MOU with Canpotex, Canada one of the largest Potash suppliers globally 88 Views

Newdelhi::28/9/22:In a significant step towards ensuring long-term fertilizer availability for the farming community, India’s fertilizer companies- Coromandel International, Chambal Fertilizers and Indian Potash Limited signed an MoU with Canpotex, Canada on 27th September 2022. The MoU was presented to the Union Minister of Chemicals and Fertilizers Dr. Mansukh Mandaviya, here today. Canpotex, Canada is amongst the largest suppliers of Potash globally, exporting around 130 LMT of product annually.

Union Minister Chemicals & Fertilizers hailed the signing of long-term agreements between the companies for the supply of MOP (Muriate of Potash) to the Indian farmers. Calling this a path-breaking step, Dr. Mansukh Mandaviya stated that “The MOU will reduce both supply and price volatility and ensure the stable long-term supply of Potassic fertilizer to India. The government of India has been encouraging the domestic fertilizer industry for establishing supply linkages through long-term partnerships with resource-rich nations. Given India’s high dependence on imports of raw material and fertilizer minerals, these partnerships provide secured availability of fertilizers and raw materials over some time and also offer price stability in volatile market conditions.”

He added that “As part of the MoU, Canpotex, Canada will supply up to 15 LMT of Potash annually for 3 years to the Indian Fertilizer companies. This supply partnership is expected to improve the fertilizer availability within the country and reduce supply side and price vulnerabilities”

Underscoring the importance of the MOU ahead of the upcoming cropping seasons, Dr. Mandaviya stated that “This is a significant initiative as it will improve the availability of MOP for the farming community, uphold their welfare and contribute towards ensuring food security in the country”. He added that this MOU will lead to “strengthening of our mutual relationship and furthering bilateral relations between the two countries”.

Dr. Mandaviya highlighted that the Government of India is working towards long-term MOUs for Potash and other fertilizers with countries like Russia, Israel, and others. Aiming at reducing import dependence, the Department of Fertiliser has included PDM (Potash derived from Molasses) in the Nutrient Based Subsidy Scheme (NBS) scheme to support indigenous sources of Potash. Similar initiatives have been taken in fertilizers industries for manufacturing Potash from Spent Wash.

Potash, which is the source of Potassium, is used both for direct application as MOP as well as in combination with ‘N’ & ‘P’ nutrients in NPK fertilizers. India meets 100% of its Potash requirement through imports. The country imports approximately 40 LMT MOP annually.

Canpotex is a joint venture between leading fertilizer players, Mosaic and Nutrien, and markets Potash being produced in the Saskatchewan region in Canada. It is amongst the largest suppliers of Potash globally, exporting around 130 LMT of product annually to more than 40 countries, and has been one of the suppliers to India.

2022-09-28
Editor in chief
Previous: INS Sunayna participates in Combined Maritime Forces (CMF) Exercise at Seychelles
Next: India has a target of installing 175 GW of renewable energy by 2022