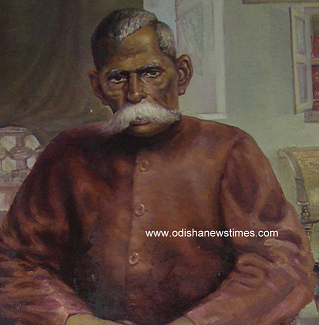 in Literature September 27, 2022 Comments Off on Kabibar Radhanath Roy ( On the eve of 174th Birth Anniversary) 254 Views

Kabibar Radhanath Roy was born in the village of Kedarpur on September 28, 1848, in the district of Balasore. He was a prominent poet of Oriya language and literature. They belonged to a Bengali clan that had settled in Odisha for generations. His poems created a new tradition in Odia poetry and influenced later poets up to about the middle of the twentieth century. Odia poetry was enriched by Radhanath Roy with the introduction of new forms, new themes, a new approach, and greater freedom than prerequisites.

He started writing at the age of 18 by writing a collection of Bengali poems and the collection of poems is get named Kabitabali. Also, this Kabitabali is getting more popular at that time. After some days he completely shifted to writing in the Odia language. Radhanath with his innovative style used simple and colloquial Oriya disparaging the older traditional ‘Chhandas’ to give wide access to the people of Orissa to know their living Gods and Goddesses, interested in human affairs: to read the myths and legends of their soil, to thrill their minds with daring and bravery heroes and heroines dressed in warrior robes to peep through his superb poetic narration the green mountains, thirsty rivers, murmuring fountains, saintly silent and shrined lakes and historically important monuments with their significance and brought a magical movement in the threshold of a new era.

During Radhanath’s time, in Orissa, the Oriya language movement was active. Though medieval Oriya literature was richer in comparison to that of Bengali literature, however, some Bengali educationalists wanted to abolish the Oriya language as the medium of teaching in schools. As Bengal was gripped by British Colonialism much before Orissa, the Bengalis had the privilege to motivate the Anglicist scholars to prove Oriya as a branch of the Bengali language. John Beams, a British Officer of East India Company first tried to prove that Oriya is a more ancient language than Bengali, and it had a richer literature than Bengali had not.

In the Orissa division, there were only seven Oriya School teachers; Bengalis formed the majority of teachers, even in remote areas. Consequently, Bengali textbooks were prescribed for Oriya students. At that time, Radhanatha was one of the prime figures along with Fakir Mohan Senapati, who fought against the expansionism of Bengali educationalists to eradicate the Oriya language from Orissa. As an Inspector of the Orissa Schools along with Fakir Mohan Senapati and Madhusudan Rao, he tried to promote textbook writings.

2022-09-27
Editor in chief
Previous: Asha Parekh to be honoured with Dadasaheb Phalke Award, 2020
Next: Amendments to Cinematograph Act proposed to be tabled in winter session of Parliament: I&B Secretary