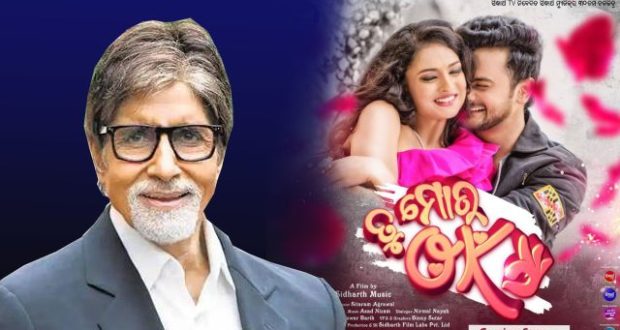 Bhubaneswar:22/9/22: Most of the newspapers and news portals of odisha flooded with news that Bollywood superstar Amitabh Bachchan. tweet for Odia film- “tu Moro ok” and convey wishes to Sheetal & Team. Here are the details:

@dayaent(Production house and advertising agency based at Odisha)

The movie “Tu Mora Ok,” produced by Sitaram Agrawal, and directed by Mrityunjay Sahoo, was made under the Sidharth Music Banner and Jyoti and Sheetal are portrayed as the key characters of the movie. Dayanidhi Dahima(  @Dayaent) an established Odisha ad filmmaker, has also been labeled by Big B. Jyoti Ranjan Nayak, Sheetal Patra, Pintu Nanda, and Pragyan are among the actors featured in this new film.

As per a report Odia film TU MORO OK is remake of the Telugu Film CHI LA SOW of 2018 and  frame to frame copy of the Hindi dubbed of that film ARJUN KI DULHANIYA,

Why suddenly Big B tweet for Odia film? From a reliable source, it is revealed that in response to a tweet from @Dayaent( an established Odisha ad filmmaker)@SrBachchan tweeted for Odia film- “tu Moro ok” and convey wishes to Sheetal & Team. After that cast and crew of the film try to encash this tweet as a promotion for the film, But unfortunately, it is found that Odia film TU MORO OK is a remake of the Telugu Film CHI LA SOWof 2018 and this film has owned national award for original script in 66National film award.

2022-09-22
Editor in chief
Previous: Installation of Location Tracking Device and Panic Button will be made compulsory for public transport vehicles
Next: Odisha Cabinet Nod for 33 important decisions for different sector