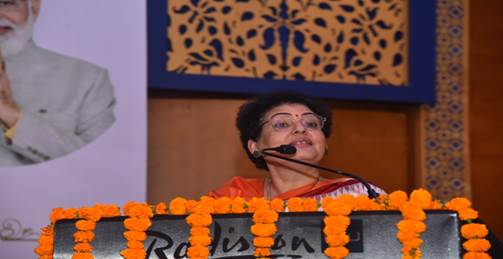 In her inaugural address, Governor Dr. Tamilisai Soundararajan motivated the women MLAs with her valuable experiences and appreciated their efforts toward the nation and the public. She said that women have come a long way from being a homemaker to becoming a changemaker and though it is not an easy task women have dedicated their lives to serving the country and humanity. She also said that it was not an easy job to be a people’s representative and no matter the number of challenges but women must be confident and consistent in their hard work and they will achieve their goals. She also said that there is a need to prepare men to live with strong women.

While delivering her inaugural address, Chairperson, NCW, Ms. Rekha Sharma said that the workshop has been conceptualized and developed to promote capacity-building for women leaders. She said that every woman is a leader and all that they need to do is polish their skills.

The three-day workshop has been organised in Udaipur, Rajasthan in collaboration with National Gender and Child center, Lal Bahadur Shastri National Academy of Administration (LBSNAA). During the workshop, the women MLAs will be trained on gender-responsive governance in different sessions such as ‘Effective Leadership’, ‘Inclusive Governance’, ‘Understanding Gender-Based Violence, ‘Gender Sensitive and Inclusive Communication’, ‘Strengthening Legislative Traditions’ and ‘Digital Literacy & Social Media Training, etc. The workshop is being attended by 25 participants from the states of Rajasthan, Chhattisgarh, Madhya Pradesh, Jharkhand, Maharashtra, and Odisha.

The primary objective of the workshop is to sensitize and assist the Elected Women Representatives to build on their identified strengths and increase their levels of self-awareness in a manner that would help them in managing different and challenging paths ahead, in line with the overall ‘She is a Change maker’ programme.

Under ‘She Is A Changemaker’ project, the Commission has organised capacity building programme for women representatives in association with region-wise training institutes with an aim to improve their decision-making, communication skills, effective management, etc.

2022-09-21
Editor in chief
Previous: Anurag Singh Thakur launches training programme for 14,000 youth volunteers
Next: Security forces have won a decisive victory in the ongoing battle against Left Wing Extremism across the country