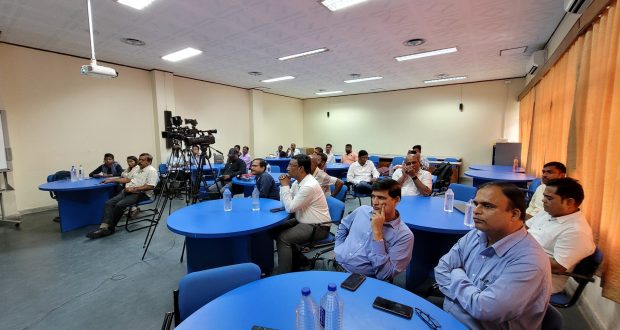 in Business, Smartcity Bhubaneswar 15 days ago Comments Off on GeM in collaboration with PIB organises GeM Seller Samvad in Bhubaneswar 44 Views

The Government e-Marketing (GeM) place in collaboration with the Press Information Bureau (PIB) on Tuesday organized the GeM Seller Samvad in Bhubaneswar, an interactive session with the stakeholders of GeM to get their feedback and suggestions to further improve the service delivery of the digital platform.

The ‘Seller Samvad’ has been planned to interact with the GeM sellers in particular and make them aware of the new GeM features and functionalities that further make it conducive for them to operate on the portal. Through the Samvad, it was also planned to have these sellers speak about their experiences and share the same with others to learn from and get inspired.

Addressing the media, Dr. Girish Chandra Dash, Joint Director, PIB highlighted the importance and benefits of unified market under GeM as envisioned by Prime Minister. Speaking on the occasion, Shri Anoop Dhanvijay, Director, Buyer Management, GeM, said that GeM has grown tremendously in past few years. “Lakhs of buyers and sellers are now connected with the GeM. With the growth, we need to sensitise people and improve its service delivery further for which programmes like this Seller Samvad is important,” he said.

An interactive session with the sellers has also been organized today wherein the sellers shared their experiences on GeM. “I have left a prestigious job and pursue my dream of becoming an entrepreneur. I have launched my startups and currently supplying education materials all over the country. In my journey, GeM helped a lot,” Pragyan Priyadarshini Chinara, a seller said.

During the Seller Samvad, another seller Mr. Priyabrat shared his experience with GeM and said that it has provided a transparent and hassle-free platform to do business and grow. “GeM has added glitter to my business. It is on a tremendous growth path. GeM has not only worked as a tremendous tool to eradicate corruption but also abolishes the middle-men practice,” he said.

It can be mentioned here that ever since the inception of GeM, it has grown by leaps and bounds. As per data, in Odisha alone, there are 1,11,931 registered vendors on GeM, which includes State Government, State PSUs, Central Government, Central PSUs among others. Total 15,323 MSME vendors from Odisha have been registered on GeM out of which 2,557 are women MSME vendors.

This is the fifth day of such Seller Samvad being organized by GeM across the country. Today, apart from Bhubaneswar, the Seller Sambads have been organized simultaneously at Patna and Ahmedabad. The aim of the Seller Samvad is to popularize the GeM portal while improving its service delivery by getting feedbacks and suggestions from its user

Government e Marketplace (GeM), the National Public Procurement Portal of the country is an end-to-end online Marketplace for the procurement of goods and services. It was launched on August 9, 2016, as part of the vision of the Hon’ble Prime Minister. GeM is known for redefining public procurement and has been able to bring about radical changes in the way procurement was done by Government buyers and public sector undertakings. GeM is contactless, paperless, and cashless and stands on three pillars viz. efficiency, transparency, and inclusivity.

It is noteworthy that GeM has surpassed the milestone of INR 1 Lakh Crore of procurement value, in a single fiscal year in FY 21-22. Cumulatively, GeM has facilitated over 1 Crore transactions valued at over INR 3.02 Lakh Crore. This has only been possible with the support of all stakeholders including buyers and sellers across the country.

Since its inception, GeM has been steadily growing with new product and service categories being added constantly. Currently, there are about 300 service categories and over 10000+ product categories available on GeM. These categories feature around 44 lakhs catalogues of product and service offerings. Further, GeM is an evolving platform and relentlessly works towards adding new features and functionalities to the portal. In line with this principle, approximately 2000 minor and 460+ major functionalities have been introduced in the last 24 months.