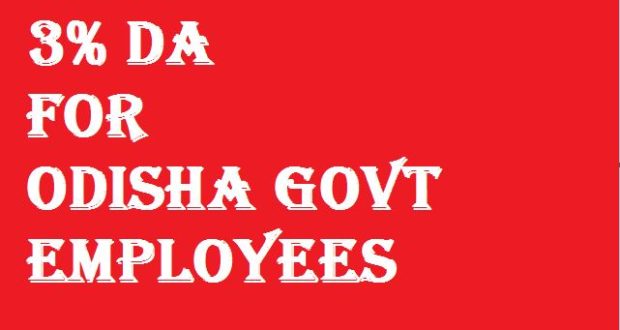 Odisha Government announced to increase the DA of government employees and pensioners by 3 percent.

in State News 16 days ago Comments Off on Odisha Government announced to increase the DA of government employees and pensioners by 3 percent. 52 Views

Bhubaneswar:19/9/22: The Odisha Government on Monday announced to increase the Dearness Allowance (DA) of government employees and pensioners by 3 percent.

Chief Minister Naveen Patnaik today approved the proposal in this regard.

The government employees and pensioners will now get 34% DA following the hike, which will be effective from January 1, 2022.

The increased amount will be provided to employees and pensioners in their salary for the month of September. The arrears of DA for the months from January to August will be disbursed by the authorities separately, a CMO release stated today.

The decision would benefit around 4 lakh employees and 3.5 lakh pensioners of the State Government.

In addition to this, the Chief Minister also announced the release of 30 per cent arrears from pay scale revision under the 7th Pay Commission. This will benefit around 4 lakh government employees in the state.

Notably, the state government employees have already received 50 per cent of their increased pay for the period from January 2016 to August 2017 as per the recommendations of 7th Pay Commissio