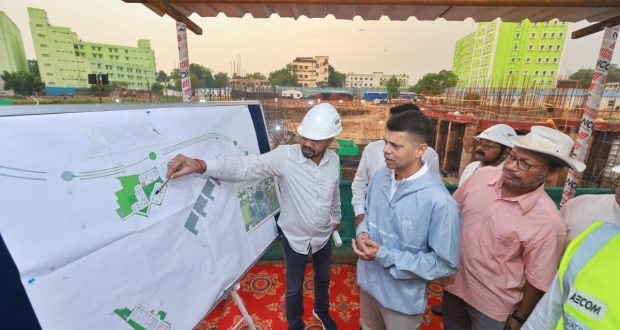 The 5T secretary also reviewed several other projects and gave instructions to speed up the completion of the work.

The senior official also ordered to commence the work of Dharamshala and budget hotels for the accommodation of patients’ relatives soon. Along with this, he ordered to start of the work of a commercial complex near Ranihat.

At least 13 residential block will be constructed for the accommodation of the faculty, doctors and other staff of the hospital. So far, work for five has been completed. For this, the senior official have been  instructed to complete the work by December 2023.

Alongside, he also asked to complete the work of SCB Public school by March 2023

As a part of the 5T initiative, the state government announced the revamping and modernizing of the SCB Medical College and Hospital in November 2019. As per the plans, the hospital will be revamped as a 3000 bedded integrated hospital with state-of-the-art facilities and will be developed as an AIIMS Plus institute.

The 5T secretary accompanied by Finance Department’s Principal Secretary Vishal Kumar Dev and other senior officials later visited the Taladanda Canal and took stock of the work. During the visit, he asked the officials to ensure that urban haat, which is touted to be one of the most ambitious projects of the Cuttack Municipal Corporation (CMC), must be completed by December 2022.

Taladanda Canal, one of the oldest canals constructed by the British to provide water to farmlands in Cuttack and Jagatsinghpur districts is all set to regain its past glory and also become a landmark for the Millennium City soon. The first phase of renovation project work of 1.55 kilometers from Jobra to Ranihat is in the final stages of completion and it has been decided to extend the canal work up to National Highway. The total length of the renovation with roads on both sides till National Highway will be 3.55 kilometers.

2022-09-19
Editor in chief
Previous: President of india Droupadi Murmu will attend the funeral of Queen Elizabeth II in London today
Next: Odisha Government announced to increase the DA of government employees and pensioners by 3 percent.