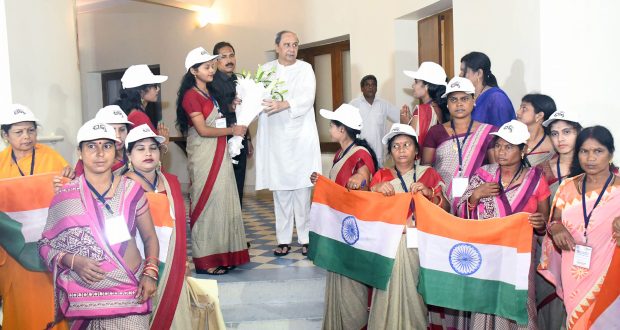 The Chief Minister thanked the members for taking up the responsibility of making and distributing national flags for the celebration of 76th Independence Day celebration on August 15th.

While praising the work of Mission Shakti SHG members in preparing and distributing the national flags in a very short period of time was a huge responsibility, Secretary to CM (5T) V K Pandian said that the Chief Minister had confidence in them while entrusting this responsibility and they have executed it successfully.

The Mission Shakti SHG members expressed their gratitude to the Chief Minister entrusting them with such a huge responsibility.

They said that because of the Chief Minister’s visionary foresight in the field of development and welfare of women, they have become capable in various fields today.

Worth mentioning that this year, on the occasion of the completion of the 75th anniversary of independence, the State government entrusted Mission Shakti SHG members with the responsibility of preparing and distributing 30 lakh national flags.

2022-09-19
Editor in chief
Previous: Eminent writer Dr. Gourahari Das will be felicitated with Sarala Puraskar for his book ‘Bagha o Anyanya Galpa’
Next: Odisha Chief Minister Naveen Patnaik laid the foundation stone for the construction of a teachers training centre