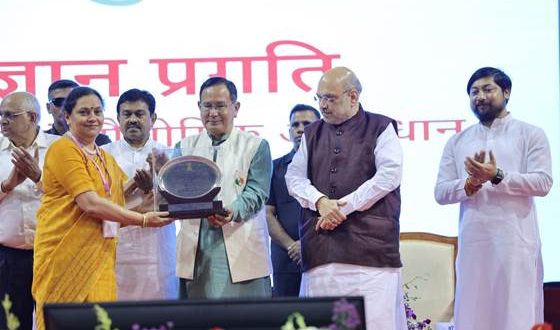 Newdelhi:17/9/22:CSIR’s popular science magazine “Vigyan Pragati” has created a new history. This magazine has received the National Rajbhasha Kirti Award (First position) and this award was given at the Second All India Rajbhasha Sammelan held during 14-15 September 2022 in the Pandit Deen Dayal Upadhyay Indoor Stadium, Surat. Department of Official Language, Ministry of Home Affairs, Govt. of India organized this grand event which was witnessed by around 9000 audiences.

‘Vigyan Pragati’ (a popular science magazine in Hindi) is one of India’s best popular science magazines. It is popular among children, teachers, researchers, and the public across India as well as the world. Council of Scientific & Industrial Research (CSIR) started publishing this magazine in 1952. It carries a legacy of seven decades and over these many years, the readers of this magazine have been motivated by its content. This monthly Hindi publication imparts knowledge of the recent national-international S&T-related developments, discoveries, inventions, and technological advancements in the form of articles, features, science fiction, science poetry, quiz, scientoon (science cartoons) and docudramas.

Vigyan Pragati aims at communicating S&T to the masses in simple language. The magazine’s contents aim at igniting curiosity about science among the young and striving to develop an interest in them to pursue science. Those engaged in preparation for various competitive examinations; use this magazine as an authentic source of information on science and technology.

Article 51 A[h] of the Indian Constitution put emphasis and says that it is every citizen’s fundamental duty to develop a scientific temper, the spirit of enquiry, humanism and reform. Science magazines play a vital role in communicating S&T to the common man and thereby developing scientific temper.

On this great occasion, Prof. Ranjana Aggarwal, Director, CSIR-National Institute of Science Communication and Policy Research said that Rajbhasha National Kirti Award to ‘Vigyan Pragati’ is the honour of CSIR as well as all its readers, writers and editors.