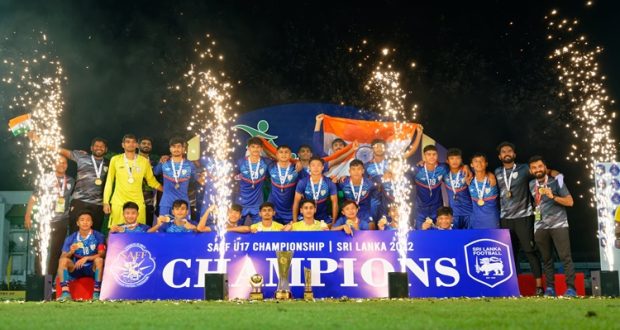 Colombo:15/9/22:  In football, India clinched the SAFF under-17 Championship title, defeating Nepal 4-0 in the final in Colombo yesterday evening, September 14.

Boby Singh, Korou Singh, captain Vanlalpeka Guite, and Aman scored a goal each, to shape a resounding victory in India’s favour. With this win, India retains the title.

In the group league, Nepal defeated India 3-1. However, in the final, India produced a clinical performance, to lift the title for the fourth time.

India captain Vanlalpeka Guite was named the Most Valuable Player of the Tournament, while goalkeeper Sahil won the Best Goalkeeper award.

2022-09-15
Editor in chief
Previous: Union Cabinet approves inclusion of tribes of five States in the Scheduled Tribes category
Next: Prime Minister Narendra Modi will be on a two-day visit to Samarkand in Uzbekistan