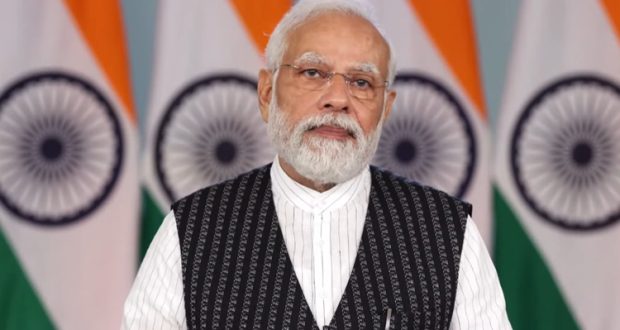 Newdelhi:7/9/22:Prime Minister Narendra Modi has said that India is keen to strengthen its partnership with Russia on Arctic subjects. Addressing the Plenary Session of 7th Eastern Economic Forum being held in Vladivostok through video conferencing, Mr Modi said, there is immense scope for cooperation in the field of energy. He said, along with energy, India has also made significant investments in the Russian Far East in the fields of pharma and diamonds. The Prime Minister said, in 2019, he had a chance to participate in this forum face-to-face and at that time he had announced the Act Far-East policy of India. He said, as a result, India’s cooperation with the Russian Far East has increased in various fields.  Mr Modi said, today this policy has become a major pillar of the Special and Privileged Strategic Partnership of India and Russia.

He said, in today’s globalized world, incidents in one part of the world create an impact on the whole world. Mr Modi said, the Ukraine conflict and the COVID pandemic had a major impact on global supply chains. He said, Foodgrain, Fertilizer and Fuel shortages are a matter of great concern for developing countries. The Prime Minister said, from the very beginning of the Ukraine conflict, India has emphasized the need to adopt the path of diplomacy and dialogue. He said, India support all peaceful efforts to end this conflict.

Mr Modi said, this month, thirty years are being completed since the establishment of the Consulate of India in Vladivostok. He said, India was the first country to open a consulate in this city.