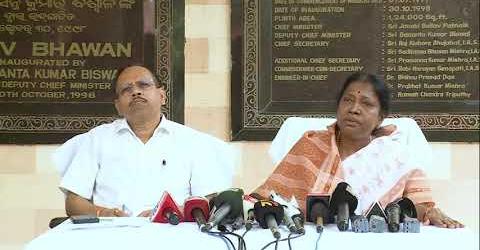 Bhubaneswar: 17/8/22:Flood conditions will continue in the state for another 4 days and the next 24 hours are very crucial for the state, said Odisha Special Relief Commissioner Pradeep Jena after reviewing the flood situation in the state on Wednesday.

According to the SRC, so far only there have been embankment breaches at five places due to the floods. While yesterday there were two breaches, today three more were reported. Yesterday breaches were reported in the Rajua river of Satyavadi and the Makara river of Khurda

Today, the right bank of the Kushabhadra river has developed breach at Ganeshwarpur Tendiakuda and in Mahanadi river nearTeramanpur under the Rahama block.

As per the latest information, a breach has been reported in the Paika river near Kathakot village in Kujang block and the evacuation has started as reported by Jagatsinghpur Collector, the SRC said in a tweet after the press meet here today.

After reviewing the flood situation, he said, the flood water entering the upper catchment of the river and the situation arising in the lower catchment were reviewed. In view of the backwater situation yesterday, 700 people including 558 school children were rescued in Cuttack. Similarly, a father and son who were trapped in the middle of the river in Athagarh were rescued, the Odisha SRC said.

This year’s excess flood water released into the rivers is much higher than in 2011. In 2011, 9 lakh cusecs of water were released into Mahanadi, while currently 12 lakh cusecs of water have been released. As the gushing floodwater could breach river embankments, the Water Resources Department officers have been asked to keep a close eye on the vulnerable spots and make necessary repairs. People are cooperating and keeping a strict vigil on the embankments, the Special Relief Commissioner informed.

While Cuttack, Khurda, Puri, Jagatsinghpur, Jajpur, and Kendrapara districts have been affected by the floods, Jagatsinghpur and Puri districts are the worst affected, SRC Jena said and informed that additional teams of ODRF, NDRF, and Fire Services have been dispatched today for rescue, relief, and restoration works.

In view of the IMD forecast of impending rains, Keonjhar, Bhadrak and Jajpur have been asked to stay alert and rainfall is predicted in Brahmani and Baitarani belts. There is constant communication with the health department which has been asked to keep adequate kits and anti-venom kits.

“Now 40 sluice gates of Hirakud Dam have been opened. In the evening, a decision will be made whether more gates will be opened or closed. There is no pressure on the Hirakud and steps are being taken to ensure the safety of the dam. The flood waters are receding. “The water will recede in 3 to 4 days,” said Bijay Mishra, engineer in chief of the water resources department.