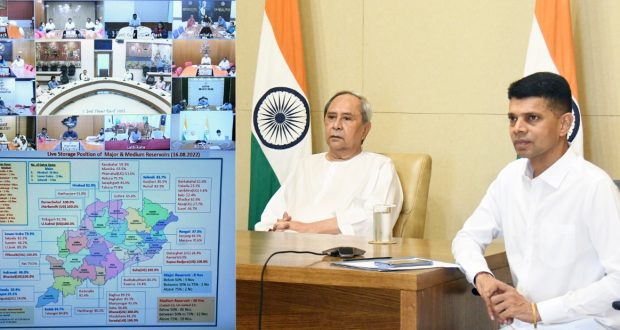 in State News August 16, 2022 Comments Off on Odisha Chief Minister Naveen Patnaik reviewed the flood situation in the State 65 Views

Bhubaneswar:16/8/22:  Odisha Chief Minister Naveen Patnaik on Tuesday reviewed the flood situation in the State and directed all officials to ensure that not even a single life is lost and that there is no widespread disruption in normal life. He also ordered the Chief Secretary and Special Relief Commissioner (SRC) to review the situation regularly.

The Chief Minister said that there is a possibility of flooding in 10 districts of Mahanadi river basin due to continuous rains. Therefore, he advised the Collectors of these 10 districts to be cautious and take all kinds of measures to prevent the flood situation.

He also directed to evacuate the people in the risk-prone areas on a priority basis and provide them with necessary relief and basic facilities. He also directed the concerned departments at the state level to provide all kinds of assistance to the districts immediately.

He also suggested that the Department of Fisheries & Animal Resources Development should provide the necessary services for the protection of wildlife.

In the meeting, SRC Pradeep Kumar Jena gave a presentation regarding the situation, preparedness, and measures and said that there is a possibility of flooding in 10 districts due to rain in the upper and lower reaches of the river.

Yesterday eight gates of Hirakud were closed and now 26 gates are open. This arrangement will continue for the next three days unless there is an emergency. Due to this, the effect of flooding in the lower catchment areas of Hirakud has been reduced slightly.

He informed that nine ODRAF teams in seven districts, nine NDRF teams in six districts, and 44 Fire Service units have been kept alert. Around 11.75 lakh cusecs of water will flow at Munduli barrage on Mahanadi river today.

All district administrations have been put on high alert. It has been suggested to transfer the District Collectors of 10 districts if necessary and take the help of Panchayat Raj institutions. Along with this, the Collectors have also been instructed to keep an eye on the river embankments and close educational institutions where necessary in the affected areas.

2022-08-16
Editor in chief
Previous: 76th Independence Day celebrated at NALCO headquarters with enthusiasm
Next: Free travel is allowed for children below 5 years, if no berth is booked