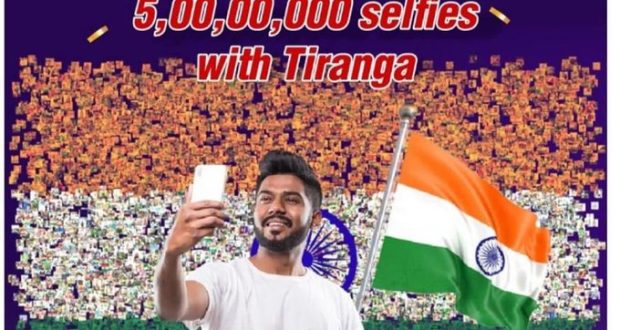 Newdelhi:16/8/22:Prime Minister Shri Narendra Modi launched “Har Ghar Tiranga” campaign to encourage people to bring the Tiranga home and hoist it to celebrate 75 years of India’s Independence.  The idea behind the initiative was to strengthen the feeling of patriotism in the hearts of the people and to celebrate Azadi Ka Amrit Mahotsav in the spirit of Jan Bhagidari. States, Union Territories, and Ministries participated extensively in the campaign with full fervor. NGOs and Self-Help Groups from various places also contributed towards making Har Ghar Tiranga, an iconic benchmark in the success path of Azadi Ka Amrit Mahotsav. Various events involving people from all walks of life were organized at locations connected with Freedom Struggle, to portray the patriotism and unity of the entire country.

Several new milestones like Guinness World Record of World’s ‘Largest Human Image of a Waving National Flag’ in Cricket Stadium, Sector 16, Chandigarh with the participation of 5,885 people have been created during the campaign. The event was organised by the NID Foundation and Chandigarh University to strengthen Prime Minister Narendra Modi’s ‘Har Ghar Tiranga’ campaign as part of Azadi Ka Amrit Mahotsav.

In another stupendous achievement, more than 6 crore Tiranga selfies have been uploaded on the Har Ghar Tiranga website till date. The programme conceived in a hybrid format envisaged a physical & emotional connect with the flag itself in the personal context and also envisaged a collective celebration and amplification of patriotic fervour through the act of uploading a selfie on the special website created for this initiative. (www.harghartiranga.com).

Also, to mark the celebrations under ‘Har Ghar Tiranga’ campaign as a part of the ongoing ‘Azadi ka Amrut Mahotsav’, the District Administration Srinagar established a national record by displaying 1850-metre long National Flag at Bakshi Stadium to celebrate 75 years of Independence.

Shri G Kishan Reddy, the Union Minister for Culture, Tourism and Development of the North Eastern Region (DoNER) thanked the citizens of the country and said, “The entire nation has come together to make Har Ghar Tiranga Campaign a success. This kind of enthusiasm from people across different walks of life is a symbol of unwavering spirit of unity and integrity of the nation”. He added, “The entire nation took part in Har Ghar Tiranga and more tham  6 crore selfies have been  taken and uploaded with the Tiranga till date. It reflects our love and pride for this great Nation. I would request all those who have taken selfies with the Tiranga to continue uploading pictures on the Har Ghar Tiranga Portal to continue the festive spirit ”.

The government of India had taken various steps to ensure the supply of flags across India. Post Offices in the country started selling flags from 1st August 2022. In addition, state governments also tied up with various stakeholders for the supply and sale of flags. The Indian National Flag was also registered on the GeM portal.The government of India had also tied up with various e-commerce websites and self-help groups to streamline the process of the supply of the Flag.

The initiative of Azadi Ka Amrit Mahotsav was launched by Prime Minister Narendra Modi on 12th March 2021 to celebrate and commemorate 75 glorious years of Independence of India. Since its launch, the initiative has successfully showcased the magnificence of Indian culture all across the globe. With over 60,000 events successfully held across 28 States, 8 UTs, and 150+ countries, the initiative of Azadi Ka Amrit Mahotsav is one of the largest programs ever organized in terms of scope and participation.