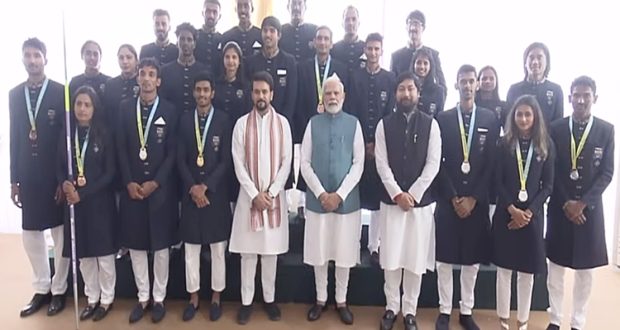 Newdelhi:13/8/22:Prime Minister Narendra Modi has said that India is not only performing remarkably in sports that it has aced historically but also witnessing stellar shows in arenas where the country was not known before. Addressing the Indian Contingent which participated in the recently held Commonwealth Games 2022 at Birmingham, at his official residence,  Mr Modi said,  Indian citizens, stayed awake all night supporting and praying for their victory.

He said, this increasing interest in sports can be credited to the stellar performances of the sportspersons. Mr Modi said, he always had complete faith in the Commonwealth contingent’s ability and today we are celebrating their success. The Prime Minister said, today, there is a growing interest in all fields of sports, amongst young people. From all those who debuted at the Commonwealth Games, 31 of the debutants won medals. He said, the spirit of New India is visible in all are athletes. Mr Modi said, this time India has won in four new games, as compared to last time. He said, from lawn bowls to athletics, there has been phenomenal performance. The Prime Minister said, the daughters of India, have made us proud.

He said, the medals won by all women athletes will inspire girls across India to join mainstream sports. He said, Medals are not just for us to celebrate, but a symbol of Ek Bharat Shrestha Bharat, where athletes just like our freedom fighters come from all over India with just one vision – to make India win. Mr Modi said, be it Boxing, Judo, Wrestling, the way our daughters have dominated in sports is nothing short of amazing. He said, the sportspersons inspire the youth of the country to do better not only in sports, but also in other sectors.

The Prime Minister said, Tiranga is the power and inspiration for all athletes. He said, their determination to keep the tricolour flying high has led Team India’s stellar performance at the Commonwealth Games.   The Prime Minister urged all athletes to meet the youth under Meet the Champions initiative of Khelo India to inspire and encourage them. He said, we have to intensify our efforts to find new talent and take them to the podium.

Mr Modi said, we have to create a sports ecosystem that is inclusive, diverse and dynamic. He said, no athlete should be left behind. The Prime Minister said, this is just the beginning for our Yuva Shakti and the Golden age of Indian sports has just begun. He said, in the past month India has not only won laurels at the Commonwealth Games, but has also accomplished historic wins in the Chess Olympiad.

2022-08-13
Editor in chief
Previous: The Ministry of Social Justice & Empowerment has allocated a total budget of Rs.100 crore for the SMILE scheme for coming years till 2025-26
Next: Renowned author Salman Rushdie was stabbed on stage before giving a lecture at the Chautauqua Institution in western New York