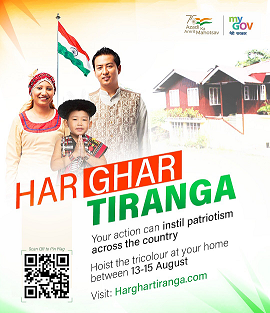 in National August 13, 2022 Comments Off on ‘Har Ghar Tiranga’ campaign to mark 75 years of India’s Independence to kick off on 13th August 109 Views

Newdelhi:13/8/22:The ‘Har Ghar Tiranga’ campaign to encourage people bring the Tiranga home and hoist it to mark the 75th year of India’s independence will kick off from today. The campaign initiated as part of ‘Azadi ka Amrit Mahotsav,’ to commemorate India’s 75th anniversary of independence will run till 15th August. The program envisages inspiring Indians everywhere to hoist the national flag at their home. More than 20 crore national flags have been made available to people since the announcement of the campaign.

In his Mann ki Baat programme last month, Prime Minister Narendra Modi had appealed to people to strengthen the ‘Har Ghar Tiranga’ movement by hoisting or displaying the national flag in their homes from 13th August to 15th August. The idea behind the initiative is to invoke the feeling of patriotism in the hearts of the people and promote awareness about the tri-colour. Apart from houses, the flag will be hoisted in PSUs, local self-government bodies, government, educational institutions, commercial establishments and private firms. The flag can be displayed even in the night of 13th August and 14th August.

2022-08-13
Editor in chief
Previous: Renowned author Salman Rushdie was stabbed on stage before giving a lecture at the Chautauqua Institution in western New York
Next: OPSC has released the admit card for Group-B posts of Assistant Section Officer