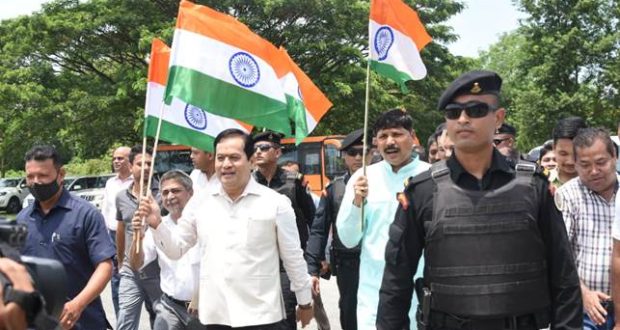 in National August 12, 2022 Comments Off on Calls upon everyone to join the ‘Har Ghar Tiranga’ festival by hoisting flags between 13 and 15 August 69 Views

Newdelhi:12/8/22:The Union Minister of Ports, Shipping & Waterways and Ayush, Shri Sarbananda Sonowal attended a public meeting at Sarusajai Stadium in Guwahati today as part of the Azadi Ka Amrit Mahotsav – a national campaign to celebrate 75 years of India’s Independence. The Minister hoisted the national flag as the crowd sung the National Anthem with great pride & passion. Floral tributes were offered at the statue of Karmabir Nabin Chandra Bordoloi after which the Shri Sonowal led a walk with enthusiastic participation from leaders and public alike waving the tricolour and chanting ‘Vande Mataram’ as patriotic fervour wafted through the air. The lively atmosphere at the event reflected the mood of Jan Bhagidari as common people joined hands with everyone else to celebrate the 75th anniversary of India’s Independence with pomp & grandeur

.Speaking on the occasion, Shri Sonowal said, “The tricolour is our honour, our pride & our symbol of self respect. Let us join hands under the pious contour of the Tricolour to dedicate ourselves at the service of our country. The call by our honourable Prime Minister about Har Ghar Tiranga has resulted in a massive people’s movement. Our Prime Minister has kept the ideals of our freedom fighters as guiding mantra as he commits himself to rebuild our nation. Modiji is working tirelessly to make India Vishwaguru and Atmanirbhar. The people from all walks of life are celebrating this festival of independence in Assam under the able leadership of Chief Minister, Dr Himanta Biswa Sarmah. I appeal to everyone to hoist the tricolour between 13 and 15 August in their homes so as to stir up the patriotic spirit in the society.”Espousing the need for a New India, Shri Sonowal said, “Till 2047, when India will complete 100 years of independence, we have 25 years of Amrit Kaal. Our popular leader Modiji has laid great emphasis during this time when we must invest ourselves completely & responsibly in nation building so that India becomes an Atmanirbhar and the best country in the world.”

2022-08-12
Editor in chief
Previous: Youth have to make largest contribution to nation building and make the country Vishwaguru: Sports Minister
Next: The Ministry of Social Justice & Empowerment has allocated a total budget of Rs.100 crore for the SMILE scheme for coming years till 2025-26