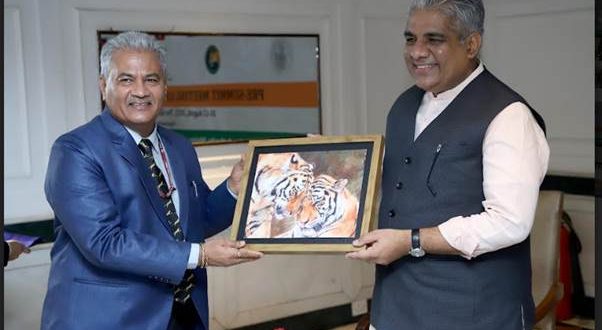 in Environment, National August 10, 2022 Comments Off on Tiger Range Countries Have Done A Commendable Job On The Wild Tiger Front: Bhupender Yadav 77 Views

New Delhi:10/8/22: Pre-summit meeting of the Tiger Range Countries as a prelude to the Tiger Range Countries Summit scheduled to be held at Valadivostak, Russia, is currently in progress in New Delhi. In his Ministerial address session, Union Minister for Environment, Forest and Climate Change, Shri Bhupender Yadav, welcomed the senior officials of TRCs and said that India is happy to host the pre-summit meeting at New Delhi.

Addressing the delegates, the Union Minister said that the inputs of senior officials responsible for implementing tiger actions are invaluable for shaping up the tiger declaration to be adopted in the forthcoming summit at Vladivostok, Russia.  Since the previous summit in St. Petersberg in 2010, a lot has happened globally, leaving an impact on several walks of life and wild tiger conservation is no exception to the phenomenon, he added.  Despite all odds and ever-transforming world order, Tiger Range Countries have put up a brave front and done a commendable job on the wild tiger front for which he complimented all Tiger Range Countries.

During the 3rd Asia Ministerial Conference, the Prime Minister of India observed that tiger conservation is not a drag on development and both can happen in a mutually complementary manner by reorienting our conservation strategies. MoEF&CC is committed to realise the vision given by the Hon’ble Prime Minister by integrating the wildlife safeguards in infrastructure projects by adopting landscape-level conservation approach and mitigation measures. India is home to 52 Tiger Reserves covering approximately 75,000 Sq Km area in 18 States with approximately 75% population of the wild tiger at a global level. India achieved the goal of doubling the tiger numbers in 2018 itself, four years in advance of the targeted year 2022.  Also, so far 17 Tiger Reserves in the country have got CA|TS international accreditation and two Tiger Reserves have got International Tx2 Award.

Union Minister for Environment, Forest and Climate Change also informed that India is committed to bringing all the potential tiger habitats within the country under tiger reserve network and support funding through the Centrally Sponsored Scheme – Project Tiger has also gone up. More inclusive conservation efforts by involving local communities who live in close proximity to tiger reserves are very important, said Shri Yadav. He further added that, while the achievement in numbers in the field is significant, it is time for focusing more on consolidating the gains and the country is in the process of formulating the vision plan for tiger conservation in India by involving all the stakeholders.  The codified practices for wild tiger conservation have proven to be useful in reintroducing locally extinct species like the Cheetah which will happen very soon.

India is having bilateral agreements and MoU with several Tiger Range Countries and is working very closely with Cambodia, for technical assistance towards bringing back wild tigers. Likewise, a technical partnership has been firmed up with the Land of the Leopard National Park in Russia for sharing best practices in science-based wildlife monitoring. He also said that as the Founding Member of the Global Tiger Forum, an inter-governmental platform, India intends to further partnerships and collaboration with all the Tiger Range Countries to secure the future of wild tigers both in India and as well a global level.  The Union Minister expressed his confidence that the deliberations of the pre-summit meet will pave the way for securing the future of wild tigers and their habitat globally.