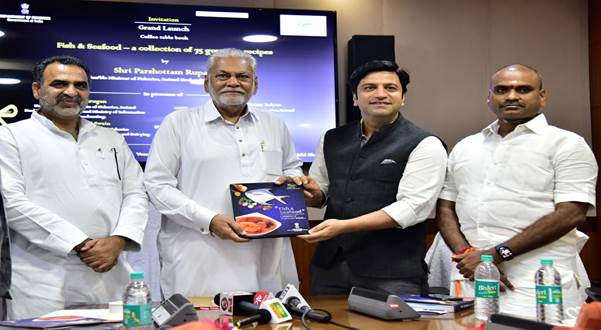 Newdelhi:10/8/22:Union Minister of Fisheries and Animal Husbandry Shri Parshottam Rupala launched a unique coffee table book titled ‘Fish & Seafood -a collection of 75 gourmet recipes’ here today. In an effort to boost the domestic consumption of fish and seafood, along with popularizing the local fish species, the Department of Fisheries under the Ministry of Fisheries, Animal Husbandry and Dairying has come up with this initiative. The book was launched in august presence of both the Minister of States (MoS) Dr L. Murugan and Dr Sanjeev Kumar Balyan, Shri Jatindra Nath Swain, Secretary; Shri Sagar Mehra,Joint Secretary (Inland Fisheries); Shri J Balaji, Joint Secretary (Marine Fisheries), other Department officials, PMC to PMMSY and Special Guest Celebrity chef Shri Kunal Kapur. The coffee table book and its launch event are a part of the ongoing celebration of 75 glorious years of India’s Independence, under the campaign Azadi Ka Amrit Mahotsav. The recipe book is a highlight of the diversity of fish available within the domestic water bodies and the fish culinary heritage of the country that signifies the diverse cooking and eating styles across the country.

At the launching ceremony of the Coffee table Book, Shri Rupala congratulated the Department for ideating the book and representing it in an interesting manner that captures the essence and amalgamation of Indian ‘Rasoi’, various traditional fish festivals and culture. Dr. L Murugan, MoS in his congratulatory speech shared how the recipes of Tamil Nadu in the book made him nostalgic through a time-travel to the mouth-watering coastal fish delicacies. Shri Jatindra Nath Swain also spoke on how his home state Odisha relishes fish as it is a part of their regular diet. He also mentioned how the Department is taking various efforts to support the livelihood of the small and artisanal fish farmers. Celebrity chef Kunal Kapur, who is popular for his speciality Indian cuisine also appreciated the concept of the book that features local recipes from different parts along with the names of the fish. He mentioned that the event made him travel through the memoir of his childhood days of his father preparing fish fry for his family and later on his introduction with different fish varieties and its diverse cooking style in different parts of the country.

Fish and Seafood are an important part of the Indian diet since ancient times. Many remains found to indicate the consumption of fish as a significant dietary element in the Indus Valley Civilization. Fish has become an integral part of the Indian diet regime considering its nutritional value. According to the Food and Agriculture Organization (FAO) projections, aquaculture will be responsible for nearly two-thirds of India’s fish production by 2030. This is indicative that fisheries and aquaculture is equally important for employment, as well as a vital source of food and nutrition security, especially for the rural population

.Shri Mehra, Joint Secretary (Inland fisheries) mentioned that the through PMMSY scheme, the Department has been taking various strategic initiatives to increase the domestic fish consumption from 5kg per capita to 12kg per capita, doubling the exports to Rs. 1 lakh Crore and increase productivity from 3 tons per Ha to 5 tons per Ha. He motivated everyone to add fish in their diet as it is an affordable protein source and encouraged everyone to experiment the recipes featured in the book

2022-08-10
Editor in chief
Previous: Tiger Range Countries Have Done A Commendable Job On The Wild Tiger Front: Bhupender Yadav
Next: MoU has been signed between the Department of Water Resources Government of Odisha and National Institute of Ocean Technology