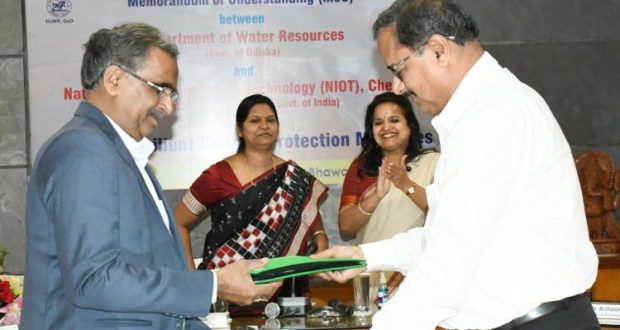 in State News August 10, 2022 Comments Off on MoU has been signed between the Department of Water Resources Government of Odisha and National Institute of Ocean Technology 75 Views

Addressing the occasion,  Minister Tukuni Sahu said that as Odisha is vulnerable to floods and cyclones, under the able leadership of Chief Minister Sri Naveen Patnaik, the State Government is taking all possible measures for disaster mitigation and focusing on zero casualties. So the MoU signed for the next 5 years will help to save the life and property of people of coastal areas with the protection of sea embankments.

ACS, DoWR Anu Garg, while giving details about MoU, stated that NIOT will provide the technical guidance, design & drawing of climate resilient coastal protection measures. It will also work for saline embankments, assisting the supervision, training and capacity building of engineers. The inhabitants of six coastal districts of the State such as Balasore, Bhadrak, Kendrapara, Jagatsinghpur, Puri and Ganjam will be benefitted. This shall be a milestone in Disaster Risk Reduction (DRR) in the coastal areas of the State, Smt Garg added.  Among others Special Secretary, DoWR & MD, OLIC Smt. Archana Pattnaik, other senior officers of DoWR and Scientists from NIOT were present. Collectors, Senior District level officers and  Engineers of  DoWR working in the above coastal districts were also joined the programme in virtual platform.

Odisha has a vast coastline of about 480 km length and the coastal area is exposed to natural disasters. Cyclones cause high tidal surges with very high wind speed, thus resulting in loss of lives and properties. Such erosion of coastline has been observed at many places in the recent past. The government has planned to take up climate resilient coastal protection measures, raising and strengthening of saline embankments using latest technology available in the country as a permanent and sustainable solution.

National Institute of Ocean Technology, Chennai (NIOT) under the Ministry of Earth Sciences, Govt. of India is a premier Institute in the country specializing in the field of Ocean Engineering and Coast-line protection.