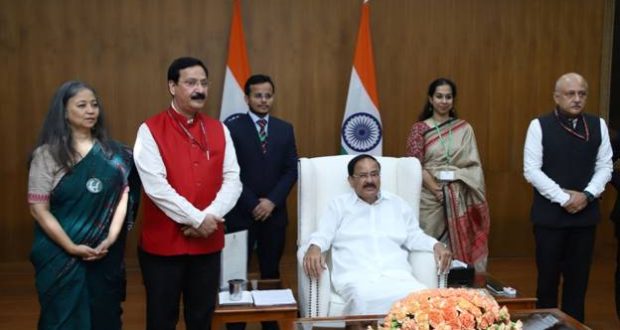 in National August 9, 2022 Comments Off on Vice President interacts with the Indian Information Service (IIS) officers of batches 2018 & 2019 73 Views

The Vice President, Shri M. Venkaiah Naidu today emphasised the need for constant dialogue between the people and the governments for citizen centric and responsive governance. He said that policymaking and implementation should be a two way process with people’s participation at every stage.

Addressing the Indian Information Service officers of 2018 and 2019 batches who came to call on him at Upa-Rashtrapati Nivas today, Shri Naidu highlighted the role of communication in bridging the divide between the governments and citizens. “In a democracy, people need to be empowered through timely information on government’s policies and initiatives in their mother tongues. On the other hand, governments also need to be apprised of people’s expectations and aspirations in an objective and timely manner,” he said.

Referring to the mass behavioral change campaign undertaken as part of the Swachh Bharat Mission, Shri Naidu said that the success of any reform depends on the cooperation from the people. He further said that people will understand and support an initiative better when they have been involved in its planning and implementation strategy from the beginning.

Describing India as the largest Parliamentary democracy in the world, he said that the purpose of any reform process should be to make people’s life happy and prosperous. “Therefore, the focus of all government policy measures should be on bringing lasting happiness to people’s lives,” he told the officers, and at the same time, underscored the need to bear with “temporary pain for long term gain”.

Mentioning that the ICT revolution and spread of the internet have fundamentally changed the way we consume news, he cautioned that this ‘ease of information’ comes with its associated risks. “Misinformation, disinformation and fake news have emerged as new challenges which need to be promptly tackled by the government communicators round the clock,” he added. The Vice President also cautioned against the misuse of social media by certain anti-social elements, the Vice President called for curbing such tendencies at the earliest.

Referring to the increasing frequency of extreme climatic events and erratic weather patterns across the globe, the Vice President asked the young officers to run a mass media campaign for nature conservation and environmental protection. “If you love nature, nature will protect you,” he told them.

Cautioning against the populist measures to garner votes by various political parties, Shri Naidu said that the freebie culture has led to deteriorating financial health of many states. “Government should definitely support the poor and needy, but at the same time should prioritize health, education and infrastructure development,” he said.

In his address, his last as the Vice President of India, Shri Naidu said that “the key to my rise from an ordinary farmer’s son to the second highest constitutional post in the country lies in sheer hard work, single minded devotion and constant travel and interaction with the people in every part of the country.”  I have learned a lot by meeting and talking to the people, he said. 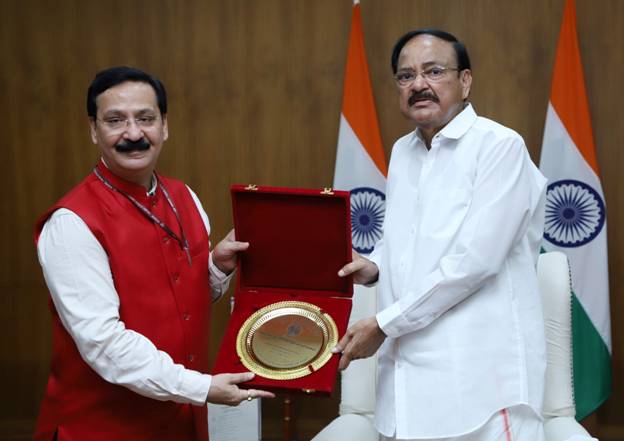 Congratulating the officer trainees for joining the prestigious Civil Services, he exhorted them to work for transforming the lives of people in the country. It may be noted that the Indian Information Service (IIS) is a Central Group ‘A’ Service whose members work as the media managers of the Government of India. The IIS officers, in their various capacities, act as a vital communication link between the Government and the people by way of disseminating information and communicating various Government policies and schemes to the public at large.