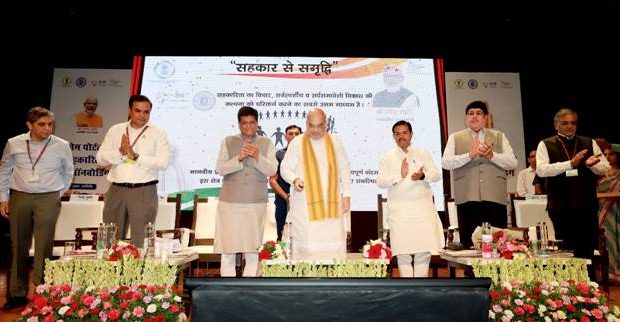 in National August 9, 2022 Comments Off on Amit Shah e-launched the onboarding of cooperatives on the Government e Marketplace (GeM) portal in New Delhi 88 Views

Newdelhi:9/8/22:The Union Home and Cooperation Minister, Shri Amit Shah launched the onboarding of cooperatives on the Government e-Marketplace (GeM) portal, today in New Delhi. The program organized by the Ministry of Cooperation, Government of India, the National Cooperative Union of India (NCUI) and GeMwas also attended by Union Minister of Commerce and Industry Shri PiyushGoyal, Union Minister of State for Cooperation and North East Region Development Shri B.L.Verma and the NCUI President Shri DilipSanghani and many other dignitaries

.In his address, Shri Amit Shah said that today is a very important day in Indian history. In 1942, on August 9, Gandhijibegan the Quit India Movement against British Rule and today another important work is being done task is taking place on the occasion ofAzadikaAmritMahotsav on August 9, in which access to GeMhas been given to cooperative societies in the country.  He said there is immense potential in the cooperative sector and the GeM portal will be a very useful platform for the expansion of this sector. The Union Minister of Cooperation said most of units of the government buy through GeM, so cooperatives should also start preparing for registration for supply on GeM to increase their market. He also appealed to the National Cooperative Union of India (NCUI) to expand marketing of cooperatives and for this there can be no better way than the GeM.

The Cooperation Minister said this sector has been neglected since Independence, but Prime MinisterNarendraModi is accelerating its expansion with historic reforms and modernization. Under the leadership of Shri Modi, the Ministry of Cooperation has taken a number of measures for expansion and in the last year the Ministry has been continuously working on 25 to 30 initiatives.

The government has to expand cooperatives but there is no database, therefore the ministry is also creating a national level database of different categories of cooperatives. Arrangements for training will also be made available. Shri Shah said an export house is also being registered the work for which will be completed by December. It will provide a platform for export from cooperatives across the country. He said radical changes are also being made in the Multistate Cooperative Act and the government led by Shri NarendraModi has also decided to computerize all PACS.